The Aquila, Italian for eagle was a converted aircraft carrier which was originally built as the passenger liner SS Roma. Like the Seydlitz, Axis forces aimed for military superiority with the addition of carriers to its fleet. Only this time it was Italy doing the design and not Germany, although the German did have a good deal of involvement with the design. 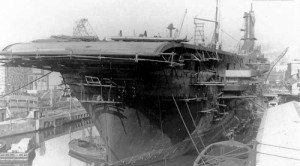 Conversion started in 1941 with what was to be Italy’s first aircraft carrier. The Italian navy had investigated conversion and construction of aircraft carriers before the war. This merchant ship Citta di Messina had been successfully converted to a seaplane tender in 1927 and could carry up to four large and 16 medium seaplanes. Most of her career consisted of experiments with catapult design.

The Regia Marina had however not been fully convinced that carriers are needed. For much of the Citta di Messina’s life the Regia Marina debated her existence. On 27 January 1941, a conversion plan for the Roma, also a commercial ship, was rescinded just as quickly as it was laid to table. It took a loss of three heavy cruisers of the coast of Cape Matapan to finally convince the Regia Marina otherwise after which  work on the Roma finally started on June 21, 1941. This ship would came to be known as the Aquila since a battleship by the name Roma had then already been started. Construction of the Aquila started during November, 1941 in the docking yards of Cantieri Ansaldo, Genoa. 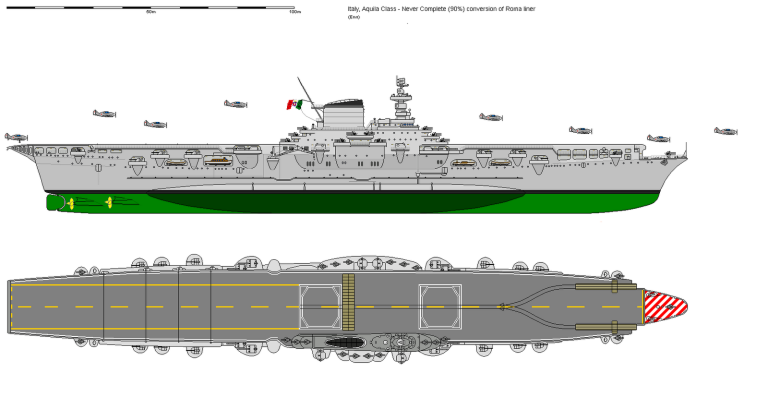 The Aquila was to be powered by a total of 4 steam turbines, which in turn was fed by 8 boilers. The four turbines had been taken from the two cancelled light cruisers in the Capitani Romani class. This arrangement was able to power the ship to a top speed of 32 knots. She would be serviced by a crew of 1,420 men and a total of 60 aircraft.

Construction on this project would essentially mean cutting up most of the Roma to accommodate the various parts of the carrier like the hangers and flight deck. The hull of the ship was modified to a great extent to also allow for new boilers and turbines to be installed. Additionally workshops were also installed. The ship’s length was also increased, taking advantage of the powerful turbine arrangement. Additional fuel tanks and magazines were also installed, covered in thick armor, with the aviation fuel tanks additionally being water jacketed to protect against vibrations from near hits.

Selection of the aircraft had been a long and thorough process but had eventually been decided to be the Saiman 200, Reggiane Re.2001 OR and the Fiat G.50/B.  German engineers with experience on the Graff Zeppelin had also been part of the selection process, bringing with them sample of their own aircraft. All of the selected planes had been land based units and in the end only 10 of the Re.2001 airplanes had been converted.

The flight deck measured in as a single continuous unit of 695 feet by 82 feet with thick armor covering the fuel bunkers and magazines. Two octagonal lifts were also installed, carrying aircraft from deck to the hangars. Catapulting the airplanes skyward was tasked to two Demag air driven units, which had been supplied by Germany. These together with the arrester gear had originally been constructed for the German ship Carrier B. However the arrester gear could not be trusted. Italy, hungry for victory then went as far to suggest ditching the aircrafts at sea after a successful mission if they could not return back to a land based runway. Fortunately, during March 1943, after months of work, the arresting gear was made to function correctly.

Protecting the ship from both aerial and sea based threats were tasked to an array of 14 heavy guns. An additional 12 guns which had still been in development was planned for installation but these weapons had never been fully developed. The six 65 caliber anti aircraft guns were position as three units aft and fore of the island. Another 14 dual purpose guns with a caliber of 45 had been positioned at various key positions across the flight deck. Finally a total of sixteen six barrel cannons had been mounted just below the flight deck. 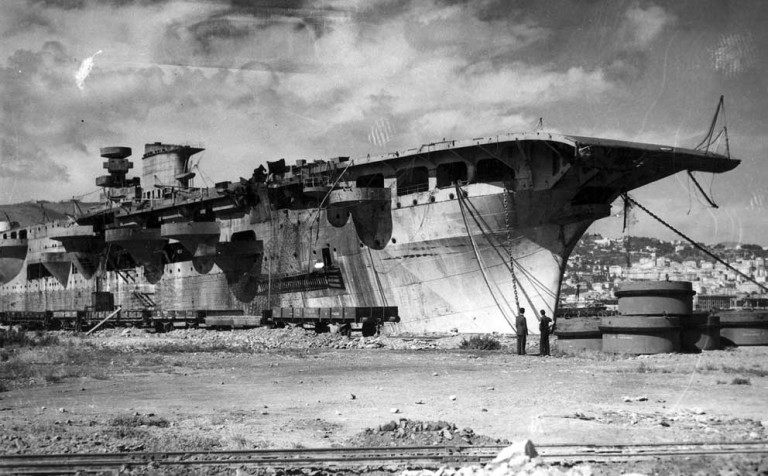 Everything seemed to be going well for the Italians, but that changed when the Armistice of Cassibile with the Allies was signed on September 3, 1943. This effectively made Italy part of the Allies and against her the Axis powers and in particular Germany. It also saw the country being divided, leading to a civil war between parties that had been for the decision and against it with both sides fighting fiercely with one another. This also led to the finalization of the Aquila grinding to a halt. Germany, abandoning all hope of Italian assistance, moved in to confiscate the Aquila as they deemed it their property.

During an attack on the city led by Allied forces on June 16, 1944 the ship had been damaged by an aerial assault. Allied ships could easily be blocked entry into the harbor by effectively using the Aquila as a barrier so the ship was partially scuttled by La Decima from the Regia Marina, loyal to the Allies. The ship was however refloated in 1946, stored, then eventually towed out to La Spezia in Northern Italy were she would have been completed or converted. This project however, was never launch and she was eventually scrapped in 1952.

I-400 Submarine – The Largest WWII Sub