A Canadian built, supersonic delta-winged interceptor, the CF-105 Arrow was built by Avro Canada. It held the promise of near Mach 2 speeds at altitudes of 50,000 feet and it was intended to be the Royal Canadian Air Force’s primary interceptor during the 1960s.

Avro Canada was originally set up as a subsidiary of the Hawker Siddeley Group, and was initially focused on aircraft repair and maintenance at the Toronto Pearson International Airport. It then began to support the Royal Canadian Air Force’s (RCAF) by developing and maintaining the Avro CF-100 Canuck. By now Avro’s engineering department has started to consider the idea of supersonic flight already. They realized that if the wings are constructed as a much thinner airfoil with a longer chord, wave drag was reduced noticeably. This however presented its own problem; it reduced the fuel storage and left little room for armament in the wings. They then discovered they could enable the same behavior if the used a conventional airfoil thickness, sweeping it to the rear at a sharp angle. This also had the advantage of clearing the wings from the supersonic shock wave generated by the nose of the aircraft. 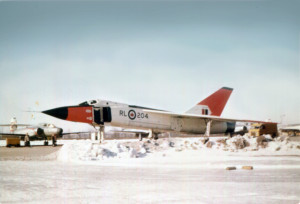 Implementing this design Avro designed a modified CF-100 with a swept-wing which eventually became known as the CF-103. The design however only made it to the mockup stage when the CF-100’s advancements in technology allowed it to break the sound barrier, negating the purpose of design of the CF-103
The knowledge gained about the advantages of a swept-wing design lead to the development of the delta wing. This design had similar advantages to the swept-wing design but also improved the internal room and surface area of the wings considerably. Internal room for fuel storage was at that stage, and even today, is a critical consideration. Since the jet engines of those days were a lot less fuel efficient than today, this design received significant attention.
Disadvantages of the delta design included higher drag at lower speeds and during maneuvering. This however, was not considered to be a problem since the primary role of an interceptor was making a beeline to where it was needed, flying straight and at high speeds.
This design became known as the C104, and was available in a single engine (C104/4) and twin-engine (C104/2) designs. The C104/2 had a much larger physical design, allowing more space in the internal weapons bay. 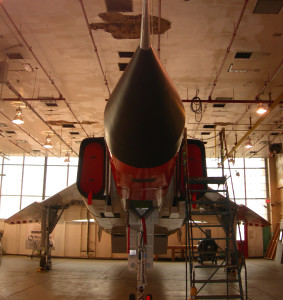 Avro and the RCAF now started to discuss a range of sizing and configurations for the supersonic interceptor, cumulating in RCAF Specification AIR 7-3. This specification called for a twin engine interceptor able to do low-speed missions with a range of 300 nautical miles and high-speed missions with a range of 200 nautical miles. It also specified the length of the runway required, required the aircraft to have a crew of two and a ground turnaround time of 10 minutes, a requirement none of the aircraft producers in the U.S., Britain or France could fulfill. Cruising speed was specified at Mach 1.5 at 70,000 ft and maneuverability allowing 2G turns to be done at Mach 1.5 with no speed loss at an altitude of 50,000 ft.
Avro submitted its design, fulfilling these requirements in May 1953. The design was essentially a C104/2 with space for two. The wings were also “shoulder mounted” as a single structure which resulted in improved strength and allowing rapid access to the engines, internals and weapons bay. Engine considerations for this design featured either the Bristol Olympus OL-3, the Orenda TR.9 or the Curtiss-Wright J-67.
In July 1953, this design was accepted under the project name CF-105, ordering five Arrow Mk. 1 test aircraft in March 1955 to be followed up by 35 Arrow Mk. 2’s with production engines and fire-control systems. The test crafts where operated by a fly-by-wire system controlling a high force hydraulic system. This system however, did not give any stick feedback, making it feel unnatural. Compensating for this, actuators in the stick responded to hydraulic back pressure, moving the stick slightly when needed.

The final CF-105 had a wingspan of 50 feet and could take off safely with a total weight of 31 tons, including that of the aircraft weighing 22 tons. It had two Pratt & Whitney J75-P-3 turbojet engines with a dry trust of 55.6 kN each, with afterburners bringing it up to 104.53 kN each. A maximum speed of Mach 1.9 could be achieved during steady level flight and was to be outfitted with 8 AIM-4 Falcon Canadair Velvet Glove missiles.

Fate of the Fighter

With media speculation that the Iroquois engine built by Avro was also in jeopardy of being cancelled, the French government withdrew a major order for these engines. Additionally, two major American interceptor programs were also cancelled in the design phase. The Canadian and American governments were integrating their air defenses by creating NORAD and were focusing their developing efforts in furthering their ballistic missile defenses.

As a result, the aircraft had become a very political topic in the Canadian government as they debated their defense priorities. The Arrow was surprisingly cancelled on February 20, 1959, with only the test phase aircraft being delivered. Avro was not anticipating this sudden cancellation and as a result went out of business resulting in thousands of people losing their jobs.
Within two months of this order cancellation, all data, tooling, engines and aircraft was ordered by the Royal Canadian Mounted Police, to be scrapped due to fears that a Soviet mole has infiltrated Avro.
It’s legacy lives on however within a saved cockpit and nose gear, hidden by Avro employees, of RL-206, the first Mk 2 Arrow and outer panels from wings of RL-203. An Iroquois engine also somehow survived. All these items are currently on display at the Canada Aviation and Space Museum. The Museum is also building a 2/3 scale manned, high performance replica which it plans to employ at airshow. The maximum speed for this aircraft is planned to be Mach 0.74