A strategic bomber, operated by the United States Air Force from 1949 to 1959. The largest mass-produced piston powered aircraft ever built, with a wingspan just over 230 feet. The first intercontinental nuclear capable bomber, it had the capacity carry a massive payload of 40 tons and with a range of 10,000 miles.
This bomber was the primary nuclear weapon delivery vehicle between the B-29 bomber which dropped the nuclear bombs Little Boy and Fat Man on the Japanese cities Hiroshima and Nagasaki and the jet powered Boeing B-52 Stratofortress.

The B-36 was born out of a design competition launched in the United States in 1941, prior to the outbreak of World War II. With Germany doing frequent bombing runs on various cities in the United Kingdom as part of Operation Blitzkrieg, the United States was worried about the possibly of conducing their own strategic bomb runs, as Germany could very close to conquering the United Kingdom. The competition demanded a 450 mph top speed, the able to cruise at 275 mph and a service ceiling of 45,000 feet, which was well out of range of ground based anti-aircraft fire. The maximum range was to be 12,000 miles. This demands far exceeded the available technology of that time and the requirements were reduced to a maximum range of 10,000 miles and a service ceiling of 40,000 feet. Cruising speed was kept the same overall, however a more lenient approach was taken in evaluation.
Consolidated Vultee Aircraft Corporation (later Convair) and Boeing entered the competition, out of which Consolidated won the tender. Originally designated B-35, the name was later changed to B-36 to avoid confusion with the Northrop YB-35, which was another entry into the competition. 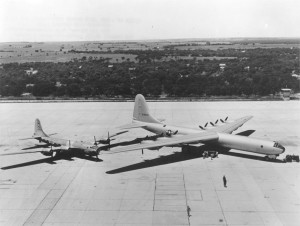 The B-36 was a super-scale aircraft for its time, two thirds longer than the previous super-bomber with a wingspan and tail height exceeding the Soviet’s Antonov An-22, the largest ever mass-produced prop-driven aircraft. Only with the advent of the Boeing 747 and the Lockheed C-5 were American aircraft capable of carrying a heavier payload. This large wingspan allowed it to carry enough fuel for intercontinental missions and reach such a high cruising altitude.
Due to the ambitious requirements, this aircraft also encountered many development delays. When the United States entering World War II, Consolidated was ordered to slow B-36 development and focus on producing proven airplane designs. Moving the first mockup of the B-36 to Forth Worth after inspection also set back the project a few months. The initial tail design was also changed from a twin-tail to a single, saving 3,850 pounds but delaying the project by another 120 days.
The landing gear on the original design also only had a single wheel per side. Since only three airport runways were able to support the massive pressure that this single wheel arrangement exerted on the runway, it was changed to a four wheeled landing gear at the suggestion of General Henry H. Arnold.
Later configurations of this aircraft were used to give the airplane more of a reconnaissance role. These configurations were named Featherweight I, II and III. Featherweight I eliminated the defensive hardware of the six remote gun turrets. Featherweight II removed the rear compartment with crew comfort features and hardware necessary to accommodate the parasite fighter, a small fighter aircraft that could be deployed from one of the bomb bays to defend the B-36. Featherweight III resulted in all these modifications and reductions being made to the aircraft. 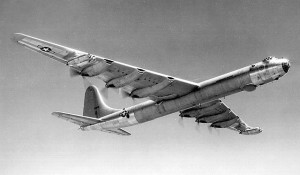 The engine arrangement made the B-36 a rather unusual aircraft as there were Six 28-cylinder Pratt & Whitney R4360’s delivered a total of 18,000 horsepower. Each of these drove a three-bladed propeller measuring 19 feet, which was mounted in the pusher configuration. This configuration had the propellers face to the back of the aircraft, which improved turbulence over the wings, however lead to more engine heat.
In addition to the six internal combustion engines, later models of the B-36, namely the B-36D also featured two pairs of General Electric J47-19 jet engines. This lead to the B-36 slogan of “six turnin and four burnin”. This engine configuration lead to the B-36 having the most engines of any mass-produced aircraft. To save on fuel, the jet engines where only used on takeoff and when extra power was needed. All combined, the engine output could be 40,000 horsepower for short periods. Manning this powerful aircraft was a crew of 15, also including the gunners for the tail and nose turret.

The B-36 had four bomb bays, and could carry a total of 86,000 pounds of bombs. In fact it could carry enough weight to be able to carry an entire Boeing B-17 Flying Fortress and then some. The B-36 were not actually designed to carry nuclear weaponry, as the designers knew nothing of these development. Nevertheless, when becoming operational, the B-36 was immediately assigned this task.
The defensive armament of the airplane was composed of six remotely controlled retractable gun turrets, and a fixed tail and nose turret with each of these turrets outfitted with two 20mm cannons.

One issue that had not been solved however, was the recoil of the cannons. When being fired they normally caused excessive vibrations in the plane often jarring loose electrical wiring or vacuum tubes. On one occasion on November 22, 1950 this led to a B-36B losing vital functionality and eventually crashing.
Engine fires also occurred frequently, with one such incident leading to the first loss of an atom bomb. Fortunately the plutonium core was dummy lead, but the bomb did contain TNT which detonated over the ocean before the crew could bail out.
The second “Broken Arrow” incident saw a B-36 accidentally dropping a Mark 17 nuclear bomb on an unpopulated area while landing at Kirtland Air Force Base. Fortunately only the conventional trigger detonated as the bomb was not armed.
Since the airframe was made of a magnesium rich alloy, it burned easily when crashes occurred making survival unlikely.

The Convair B-36 was designed to carry the T-12 Cloudmaker. This bomb was an unguided gravity bomb, designed to hit targets “soft” bombs could not reach such as bunkers. It had a hardened nose section designed to penetrate deeply into hardened concrete structures, after which detonation occurred. This bomb was also specifically designed for the B-36, weighing in at just under half the maximum payload. Other than the airplane’s bomber variant she was also used extensively in reconnaissance missions. 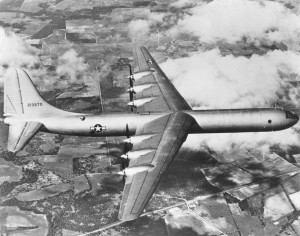 The Pratt & Whitney R-4360 engines had an unquenchable thirst for oil, with each engine requiring a dedicated 100 gallon tank. Normal maintenance like changing sparkplugs, which frequently fouled due to the leaded petrol of that time, were also a tedious task, with each engine having 56 sparkplugs, bringing the total amount of sparkplugs that needed to be changed on each service to 336.
Another tedious task of the maintenance team was to replace the dozens of bomb bay lights, which frequently shattered when the turret guns test fired.
Since the B-36 was so large, most maintenance hangars could no accommodate the aircraft. Since these aircraft where stationed as close to the areas it will likely be needed, it meant that the crew had to work outside in the extreme weather conditions that were commonplace in the northern continental United State and Alaska.
Engine fires also occurring frequently due mainly to the pusher configuration of the propellers, something not considered when the engine was designed. Carburetors iced up, enriching fuel air mixtures to the point of fires. This lead to some crews humorously changing the slogan of the aircraft to “two turning, two burning, two smoking, two choking, and two more unaccounted for” 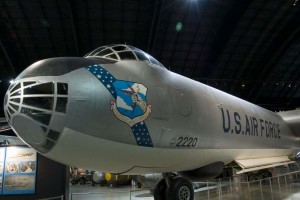 With the appearance of Mig-15’s in the 1950’s, United State Air Force propeller driven bombers became obsolete as strategic offensive aircrafts. A new swept-wing jet bomber was needed to be able to overcome the defense provided by the Mig-15 or later Soviet-designed interceptors since the slow speed of the B-36 was no match for a Mig-15
Strangely, this long range aircraft was also retired due to her lack of range. With the B-36 Peacemaker not being decided for aerial refueling, targets situated deeply in the Soviet Union was thus out of range, as no refueling bases were located along the way.
The answer to the B-36 came in the form of the Boeing B-52 Stratofortress, a jet-powered strategic bomber with a top speed of 650 mph and a cruising speed of 525 mph. The B-52 began to phase out the B-36 in 1955 without the B-26 ever engaging in any combat operations.