A helicopter, the FI 282 was a short lived German production helicopter. Named the FI 282 Kolibri, this helicopter was named after. a species of hummingbirds, found In Central and Southern America. While able to be mass produced and see combat, the project was short lived and the total production run was only 24 units.

The FI 282 was an updated version to the FI 265, Flettner’s first practical helicopter, which was announced during July 1940. Earlier models which also utilized a counter-rotational design encounter many stability problems, but Flettner kept refining his designs until finally coming up with the FI 282.
Two prototypes were ordered, which allowed flight testing from the German cruiser Köln during 1941. Repeated successful takeoffs and landings were performed from a mounted pad. The Germans were impressed by the capabilities and ordered 15 samples to test for spotting submarines with an additional 30 production models if testing performed well.
It used the same rotor configuration as the FI 265, which was of the intermeshing type. It used a Siemens-Halske SH 14 engines, with a displacement of 7.7 liters and a total power output of 160 hp. It was already a proven engine design requiring a service only every 400 hours, making it the ideal choice for the FI 282. The engine was mounted center with a transmission, which then turned a drive shaft to an upper gearbox. The upper gearbox was set up to split the rotation for the two sets of counter-rotating propellers. This provided the pilots with excellent forward view, something that was not possible in previous designs. Cooling air was delivered through openings under the fuselage by a wooden fan. Testing revealed it could achieve a flight time of just over 2 hours flying at maximum speed and had a maximum range of 168 km.
Starting the motor was done by injecting pressurized air into the pistons through a distributor. The gearbox also contained a clutch system which allowed the engine to be started without any load.
The rotor blades consisted of wooden ribs. These were mounted on steel spar and then covered with a plywood and fabric covering. A blade pitch governor held the rpm of the rotors within prescribed limits, also ensuring power-off autorotation still functioned below 160 rpm. This arrangement could produce self-excited oscillations, but this rare phenomenon was only recorded once while the auto gyro was flown with a low rotor speed and high rotor pitch.
A large horizontal stabilizer was installed at the rear of the fuselage. This stabilizer was to be used for trimming purposes and also to overcome turbulence due to inefficient design of the fuselage shape. Steering the craft was achieved by both pitching the rudder and changing the collective pitch between the two rotors.
During testing, the A series prototypes had enclosed cockpits, but an open cockpit design was preferred in later, B series proto-units, likely for weight savings and to further improve visibility. 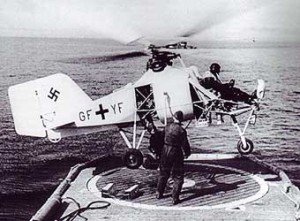 The first version of the FI 282 was only a transmission test bed, which could fly tethered to anchors.
The FI 282 V2 made its first untethered flight on October 30, 1941. Further refinement of the design allowed the V3 to achieve a maximum height of 3,800 meters in 36 minutes. The FI 282 V5 was one of the first to sport a fully open cockpit.
A lot of time was spent testing and refining the design and also training new pilots in flying this craft. Most of these test were done by Flettner’s chief pilot Hans Fruisting who was also tasked with training new pilots. A number of FI 282 were lost during this time due to the helicopter losing lift when turning into the wind. One fatal accident was also recorded when a pilot flew into a cloud and started into a dive. To correct his dive, he pulled back so violently on the controls that the two sets of blades smashed into each other, causing the helicopter to tumble to the ground.

The main purpose of the FI 282 during the war was to ferry items between ships, but as the war progressed, Germany realized the effectiveness such an aerial vehicle could have in the battlefield. A second seat was added for a spotter, with the new aircraft being designated B-2. This arrangement proved very useful for artillery spotting and a helicopter unit of three FI 282’s and three Fa 223’s was established in 1945.
The helicopter continued proving itself on the battlefield and the German Air Ministry awarded a contract for a thousand units to be produced by BMW. At that stage BMW was only able to produce 24 of these units as their Munich plant had been destroyed by the allies.
Most of the FI 282s were stationed at Rangsdorf where they flew artillery spotting missions, but their numbers gradually dwindled as they fell victim to anti-aircraft fire and Soviet fighters. The FI 282 was modified with two bomb release mechanism able to supporting 5 kg bombs. 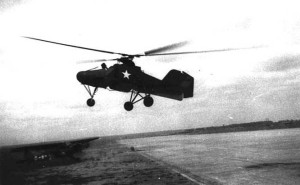 Mass adoption by the German military had been planned however the production facility was destroyed by Allied attacks on both the Flettner and BMW plants.
A few units had survived though, and FI 282 can be seen at the Midland Air Museum. Unfortunately only a partial airframe, rotor head and wheels remained intact. Unlike many weapons listed on Untested Weapons, this aircraft did see some combat however it was never able to reach it’s true potential or be classified as complete.