Dreamed up by Hans Multhopp, an aeronautical engineer and designer, the Ta 183 was supposed to win the war for Germany. The German leadership believed that this transonic aircraft would give them the competitive advantage over their Allied counterparts, which were also furiously busy designing all sorts of military equipment, including fighter planes. But this never happened

Working closely with Kurt Tank, an engineer and test pilot Hans was the team leader of a group of designers responsible for bringing the Ta 183, a Focke-Wulf light jet fighter to life. The motive for this design was influenced by the Emergency Fighter competition. The aim of the Emergency Fighter competition had been to rally interest and advances in aircraft technology.

Born in 1913, Hans studied aerodynamics under the guidance of Ludwig Prandtl, assisting with the design of gliders while doing his thesis on wing aerodynamics. In 1937, he was placed in charge of one the wind tunnels of the Aerodynamische Versuchsanstalt, Germany’s aeronautics advisory committee. In 1938 Hans was approached by Kurt Tank, who offered him a job at Focke-Wulf. He excelled in this career and was appointed as design bureau chief in 1943. One of his innovative projects was a combined flap and dive brake systems.

The Huckenbein, a reference to a troublemaking raven in Wilhelm Busch’s cartoon, was designed to make trouble for any Allied forced it encountered. With previous fighter jet designs, none had the potential for transonic speed, something the Germans believed would give them a competitive advantage in the war. The designed team thus set out to make this a reality for the Ta 183. Wing were mounted in a 40°, swept back arrangement. Even today, swept back wings gives advanced fighter jets the competitive edge. On the Ta 183, the wings were positioned mid-fuselage and far forward, this being an effect of attempting to keep the center of pressure of the wing as centered as possible.

With the war resulting in a severe lack of crucial material, wood was chosen for the spar, with wooden ribs also giving the wing its overall shape. Covered with plywood, the cavity of the wing also contained the fuel, six cells in total, giving the jet a fuel capacity of 1,565 liters.

The original design of the Ta 183 revolved around a T-Tail and wings which had the trailing edges virtually level with the jet engine’s exhaust orifice. This had the unintended effect of making the jet susceptible to a phenomena known as Dutch Roll, which can be best described as an airplane wagging its tail. Later designs aimed to eliminate this problem. The T-tail was swept at angle angle of 60° and incorporated a large vertical and undersized horizontal stabilizers. The small horizontal surface elevator, where only used for trimming, with pitching being made possible by the ailerons being well behind the center of gravity.

A strangely short and stubby looking fuselage encompassed the cockpit, a bubble canopy cockpit, mounted far forward, with later designs moving it a bit rearward to enhance handling. The cockpit was pressurized, making high altitude flight possible without endangering the pilot or the plane.

The power plant of this fighter jet aircraft was a Heinkel HeS 011 turbojet, featuring a unique compressor arrangement progressively compressing the air with a multi stage system ending in a three stage axial compressor. This prototype engine was able to produce 13 kilo Newton or 2,700 pound-force, an impressive number at that time, which when combined with a light air-frame would provide unmatched performance. Earlier prototypes of this aircraft used the Junkers Jumo 004B, the world first production turbojet engine, which was already in operation and mass production. This turbojet however, was only able to produce 8.83 kN. Early studies of the TA 183 also explored the use of a thrust rocket engine for taking of and adding extra thrust during combat, not much unlike the BMW 003R. This thrust rocket was designed to use fuel and oxidizer, enough for a 200 second boost

Another feature that added to the strange look of this jet was its air intake. Mounted where modern jets has a pointy nose cone reducing drag, this jet has a large gaping hole for an air-intake, with the intake duct being swept under the cockpit, supplying the turbojet with the necessary oxygen for combustion.

In future versions of this aircraft various design changes has been made. The second design had only minor structural changes, having the wingtips shaped differently and re-positioning the undercarriage. The next design reduce the sweptback of the wings to 32° allowing both the wing and the cockpit to be moved rearward. The latest version looked much more like a conventional plane to the modern eye. This version was entered into the Emergency Fighter Program competition, in which a second place was received. This saw the full development of this aircraft only in the last few weeks of the war, when a meeting held in Bad Eilsen decided that the Huckebein was really the best option to be used.

The main weaponry of this fighter jet were normal cannons. Centered around the air intake, four 30 mm MK 108 machine cannons provided the primary firepower for this aircraft which would be used in dog fights. With the Germans planning on outrunning an enemy, they did not deem higher firepower a necessity, and with the relatively small size of this airplane, not too many extras would have been able to be fitted. The designers did manage however to to offer four Ruhrstahl X-4 Wire Guided Air to Air missiles or 500 kg of bombs which consisted of one BT 200, and five SD or SC bombs. The plane could also be used as a reconnaissance plane with the addition of a RB 20/30 reconnaissance camera.

The test flight of the aircraft was scheduled for May, 1945 with a total of sixteen prototypes having been build, allowing interchangeable tail units between the different designs. Production of this airplane however never started as on April 8, 1945, British Allied troops captured the Focke-Wulf facilities in Germany. 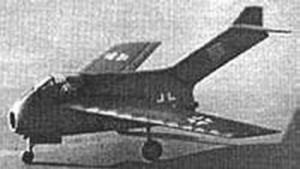 One can only guess what the effect of this advanced plane would have had on the outcome of the war. Keeping in mind that the FA 183 was designed to outgun and outrun the Gloster Meteor, the first Allied jet fighter, this could have had a major impact on the war.

Russia utilized technology and design to accelerate their development and from the Ta 183 and built the MiG-15.Still today, technological advancements made in the Ta 183, can still be reflected in modern jet fighters.