Hitler had many ambitious plans for the German Kriegsmarine and the Zeppelin, planned by Grand Admiral Erich Raeder, was one of the most ambitious Germany had no previous experience of aircraft carriers, nor did it have planes developed to land on a naval vessel. Appointed in April 1934, Wilhelm Hadeler was to draft preliminary designs for this ship. He was unsure what do design for, and thus settled for a general all round design which were also able to carry aircraft. Germany visited Japan in the autumn of 1935 to study Japan’s carrier design and obtain blueprints but still faced a lot of difficulties due to lack of background knowledge in the building of aircraft carriers. An unsuccessful attempt was also made to examine the HMS Furious, a British aircraft carrier.

On the 28th of December, 1936, the keel for the Graf Zeppelin, named in honor of Graf Ferdinand von Zeppelin, was laid down in the Deutsche Werke shipyard in the town of Kiel. At this stage Germany was still honoring the Anglo-German Naval Agreement limiting its total tonnage for aircraft carriers to 38,500 tons. The original plans called for construction of a ship of 22,000 tons, able to carry 50 aircraft but was changed before construction commenced to a total tonnage of 19,250 so that two carriers could be built.

The plan was later expanded. Germany were to develop and build four of these Kriegsmarine aircraft carriers as part of Plan Z. This was a rearmament program set up by Germany after signing the Anglo-German Naval Agreement. This agreement limited the total tonnage (fleet size) of Germany’s fleet to 35% of the total Royal Navy on a permanent basis. The Germans agreed to this deal as the sought an ally against France and the Soviet Union, which it was at war with during the mid – 1930’s. Renouncing this agreement, which Hitler did on April 28, 1939 also formed part of plan Z.
The Graf Zeppelin’s hull would have 19 watertight compartments, with armor thickness ranging from a 100 mm to 20 mm steel plating offering varying degrees of protection against proposed threats. The ship measured just over 260 meters, including a design change to the bow to improve overall seakeeping which measured in at 5.2 meters.
As many other large ships of the time, she was powered by steam with 16 La Mont high pressure boilers supplied steam to four turbines. This setup was expected to produce 150,000 kW, enabling the ship to reach a top speed of 35 knots. Maximum range was calculated at 9,600 miles while steaming at 19 knots. Two Voith-Schneider cycloidal propeller-rudders were also installed to assist in berthing the ship and navigating narrow waterways.
The flight deck of the Graf Zeppelin was made out of steel overlaid with wooden planks and measured 242 meters long and 30 meters wide. It overhung the main superstructure but not the stern, being supported by steel girders.

The ship had upper and lower hangers which were long and narrow, with unarmored sides and ends. To the outboard sides of these the workshops, living quarters and stores were located. A total usable hanger space of 5,450 m² stored a total of 41 aircraft. The array of aircraft the Graf Zeppelin carried consisted of eighteen Fieseler Fi 167 airplanes stored in the lower hanger. In the upper hanger thirteen Junkers JU 87C’s and ten Messerschmitt Bf 109T’s were stored. 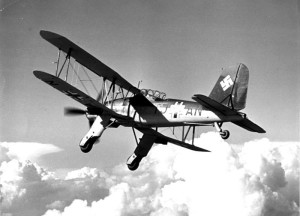 The Fieseler Fi 167, retrofitted specifically for the Graf Zeppelin, was a biplane purposed for reconnaissance missions and torpedo attack. To facilitate emergency landings at sea this aircraft could jettison its landing gear and stay afloat long enough for the two man crew to escape.
The Junkers JU 87C dive bomber was an all-metal monoplane outfitted with a water-cooled V-12 engine. One of her most innovative features was the use of dive brakes, assisting in stabilizing the plane so that the pilot could have a better aim during a dive.
Commonly called the Me-109, the Messerschmitt Bf 109T was a fighter plane. Also constructed as an all-metal monoplane and powered by an inverted V-12. This plane was also retrofitted for aircraft carriers as the T signifies Träger, a German word for carrier.

To move these aircraft to and from the flight deck three electrically operated elevators with a lifting capacity of 5.5 tons were installed. Depending on the situation, up to 8 aircrafts were to be kept on readiness on the flight deck. The engines of these aircrafts were to be heated by steam to an operational temperature. Engine oil was also stored and heated externally, pumped into the engines only when the aircraft had to launch.

Two 23 meter air driven catapults were installed at the forward end of the flight deck. Aircraft were not to attach to these catapults directly. Instead a system was designed to hoist planes onto collapsible launch trolleys which would then need to be manually recovered onto recovery platforms, which ones lowered into the hangers would be pulled by another set of rails.
Two large cylinders housed the compressed air for the catapults and contained enough air to be able to launch eighteen aircraft at a rate of 30 seconds per launch after which they were depleted. Recharging them again would take 50 minutes. To eliminate damage due ice formation caused by sudden decompression the system were insulated and heated to 68° F. Four arrester wires and two emergency arrester wires all attached to electromechanical brakes, handled landing planes.

The Graf Zeppelin was outfitted with both high and low angle anti-aircraft and anti-ship defenses. This arrangement was radically different than most other Navy’s carriers, which carried dual purpose anti-aircraft weaponry and relied on other escort ships for protection.
The ship had sixteen anti-shipping guns paired in eight armored casemates. Two of these was then mounted at each corner of the ship.
Primary anti-aircraft weaponry consisted of twelve 4.1 inch guns paired in 2 turret groups. The one group was then positioned afore and the other aft of the carrier’s island.
The carrier also had secondary anti-aircraft defenses which consisted of eleven twin 1.5 inch guns, mounted along the flight deck edges; four on the starboard, six to the port and one on the carrier’s forecastle. Additionally she also had seven 20 mm MG C/30 gun installed as single mounts.

At her launch on 8 December, 1938, the ship still had a lot of work outstanding and by the end of 1939 was about 85% complete. She was due to be completed by the middle of 1940. The ship also had aircraft squadrons, already assigned to her. However, Germany was starting to conquer Norway and the Kriegsmarine needed the weaponry on board Graf Zeppelin. Her original firing system had also been sold to the Soviet Union. The project was thus halted by Admiral Erich Raeder as it was deemed that construction of this ship would be put on hold as too many of the critical systems having been removed.
In July, 1940, the ship was towed to Gotenhafen to be used as a storage depot. When Germany invaded the Soviet Union the ship was moved again to Stettin to safeguard her from aerial attacks.
After settling in Stettin, she was moved around frequently. Hitler, who has by now became disenchanted by the Kriegsmarine for the perceived poor performance of its surface fleet, ordered that all larger ships be taken out of service and scrapped.
A final attempt at completing the ship was made by the Commander of Submarines Karl Dönitz, who was appointed by Hitler to take over the Kriegmarine. Dönitz managed to persuade Hitler to void some of his order. This saw the ship again being towed around, ending up close to Stettin, where she was maintained by a 40-man custodial team.

In April, 1945 the Red Army started nearing Stettin. To protect the ship, her Kingston valves were opened, setting her firmly in the mud in the shallow waters. The ship was also rigged out with explosives in order to sink her and destroy vital machinery. At 6 pm on the 25th of April, 1945 just as the Soviet Union started to enter the town, Commander Wolfgang Kähler gave the order to detonate.
The Soviets, unable to repair the ship in the time specified by the Allied Tripartite Commission, now had a “Category C” ship on hand which had to be destroyed or sunk in deep waters. It was refloated in March 1946, to be towed back to Leningrad.
At the harbor, the ship was then used for bomb testing. After a round of 5 bombing runs, the ship still remained afloat and Admiral Yury Rall ordered a torpedo strike. The first torpedo hit the anti-torpedo bulge with no effect, with the second torpedo hitting an unprotected area under the bow elevator, sinking her in 25 minutes.