World War 2 saw some of the bloodiest air battles in the history of the humankind. As the war was nearing its inevitable end, the diminishing resources of the Nazi Germany led to the development of the Heinkel He 162 – a single jet engine fighter aircraft. Named Volksjäger (“People’s Fighter”), it was part of the Emergency Fighter Program, a design competition created by German Luftwaffe. The He-162 was designed to be built quickly, using cheap materials, and to be flown by inexperienced pilots.

Air warfare was a major facet in all theaters of World War 2, and it put a great strain on the industrial output of all the warring powers. Germany had a different military philosophy than the allied forces, and the Nazis believed that there isn’t much use in building big fleets of long range strategic bombers. They preferred to focus on tactical and troop support strategies, which included dive-bombing of the enemy troops.
While this would prove to be their undoing, other major factor that saw the Germany lose their ground, despite developing first jet-fighters, is that the superior technology they were developing came along too late to make significant impact.
With the German defeat in the battle of Stalingrad in Russia and El Alamein in Egypt, the Nazi forces started to lose the ground. German air forces, the Luftwaffe, were buckling under the continued onslaught of the Allied air forces. The current Nazi fighter planes, Messerschmitt 109s and Focke-Wulf 190s, weren’t able to go toe to toe with the new mustangs and thunderbolts that were escorting allied bombers.

By January of 1943, the Luftwaffe had less than 4,000 operational planes remaining that were stretched thin across all the fronts. This lack of air defenses made it possible for allied forces to conduct large bombing raids targeting oil reserves, factories and other strategic targets, dealing a crushing blow to the, once mighty, third Reich. 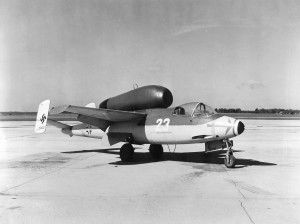 With their oil reserves almost depleted, factories destroyed, and other resources harder to obtain, Germany was forced to create a new design that would hopefully be able to restore the balance of the air forces, before the whole country was overrun. In their desperation, German government issued a proposal to build a large fleet of fast and agile jet fighters. This proposal, issued on September 8, 1944 would demand that the new aircraft could be built by unskilled workers from nonstrategic materials, such as wood and steel, as the major reserves of aluminum and advanced alloys was used in maintenance and production of the already existing aircraft.

The proposal was sent to seven major firms, but the contract has been rewarded to Heinkel on October 19, 1944, after reviewing all the offers, because it was deemed that their plane would take least time for construction.
It took 74 days for Heinkel to finish their prototype of the He-162. It weighed 6,180 lbs fully loaded, of which the third of the weight were the wooden airframe, wings, nose cone, and landing gear doors. Since it had a single jet engine mounted on the top of its fuselage it had to have specially designed twin stabilizers, in order to have a clear jet exhaust.

The prototypes were armed with two 30 mm (1.18 in) MK 108 cannons, but it turned out that the recoil was too strong for the fuselage to take. Because of this, the designers opted to switch to two 20 mm MG 151/20 cannons instead, with the idea that the fuselage could be reinforced in the future to allow the use of larger caliber. The smaller caliber also had an added perk: much more ammo could be carried.
The original idea was that anyone could fly the plane, which earned it the name Volksjager (Peoples’ Fighter). While the plane was to be flown by new pilots, recruited from the Hitler Youth, that proved to be a bad idea since the plane was very difficult to handle. Some people believed that the whole idea was foolhardy and that it would divert valuable resource from other programs, such as the development of the Me-262, and that it would be a death trap to the inexperienced and young pilots that were recruited.

Since there were very few qualified pilots, and the time to train new ones was lacking, only two fighter units were created. These units were 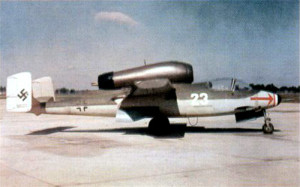 created from pilots that flew Fw-190s, which they traded for the new jet fighters. The first fighter group was then moved near the Danish border to continue its training, and this is where the first claimed kill by a He-162 happened on April 19, 1945. However, Feldwebel Kirchner, pilot credited with the downing of the British aircraft, crashed before he could return to base.
The first, and only, confirmed kill by He-162 happened in early May, by Lieutenant Rudolf Schmitt. He managed to shoot down an enemy Hawker tempest and safely return to base. Coincidentally, Lt. Schmitt is the only pilot known to use the new plane’s ejection seat and survive.
The Volksjager, also known as Spatz (Sparrow), had enough fuel to be airborne for around 30 minutes, due to both its small fuel capacity and high fuel consumption. The mounted BMW 003 engine was extremely problematic, and would cause frequent flameouts, and the engine failures accounted for most of the casualties. The plane had an excellent roll rate and good handling at higher speeds, but if the pilot wasn’t careful and rolled too hard, he could cause the failure in the tail section.
All the early jet planes were underpowered and problematic, but He-162 had the worst safety record of all the planes used in the war, which is not surprising, given how it was rushed into production. It’s often said that the Volksjager killed more German pilots than the allies. During its operation history 65 pilots were assigned to pilot the He 162. Only five survived the war. None of the pilots were killed by the enemy; they died by crashing either during the training or during ferry flights. 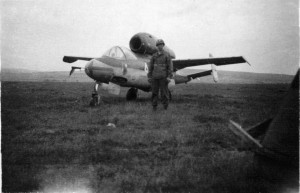 While its operational record is, frankly, dismal, the potential of this aircraft was great. Many believed that, if enough time was given to test and develop the He-162, it would have been a feared weapon in the hands of an experienced Nazi pilot.