After the WWII, many German engineers and scientists, including the legendary Willy Messerschmitt, were suddenly out of job. In order to continue his work on new aircraft designs, Messerschmitt partnered with the Spanish Air-Force to develop a new ultralight supersonic jet. This project was later transferred to Egypt, where it met an unfortunate and in 1969.

When the World War II was over, German engineers and scientists were prohibited from conducting any research or development that was related to the German military until 1955. One of these people was Willy Messerschmitt, father of modern jet airplanes, who couldn’t continue his research in Germany, so he decided to move to Spain where he started work on a new ultralight fighter aircraft for Hispano Aviación in 1951.
The progress was very slow on this new aircraft, due to the funding problems, and was finally abandoned in 1960. By that time, Messerschmitt 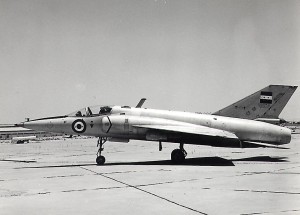 managed only to build a delta-shaped plywood tailless glider, with no power of its own. This prototype glider was towed by a Spanish bomber CASA 2.111, with every test flight failing due to the instability of the new frame.
Following this turn of events, the Egyptian government managed to acquire the design, with the idea to make their own supersonic aircraft in order to gain some form of independence from European military manufacturers. They wanted to develop their own military-industrial complex with test facilities and workshops.
This new complex was built in Helwan, Egypt, and the design team, led by Messerschmitt was moved there as soon as the basic facility was established. There, the team continued the work on the aircraft, now designated HA-300, which stood for Helwan Aircraft 300. Besides Messerschmitt, the Egyptians managed to sign another notable aerospace engineer, an Austrian jet engine expert named Ferdinand Brandner. A total of three prototypes were developed by this team by the end of the project.

Development of the First Egyptian Interceptor

The goal of the newly assembled team was to create a lightweight, single seat supersonic jet fighter, which would serve as an interceptor in the Egyptian Air Force. At the same time, Messerschmitt and Brandner were to develop a new turbojet engine, which was to be used in several new aircraft designs, including the Indian HF 24 Marut fighter jet. The development process was divided in three parallel projects: The development of the new turbojet engine, construction of a lightweight air-frame, and training of test pilots that were to fly the new planes. 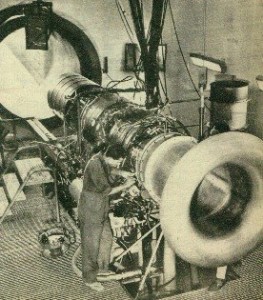 The Brandner E-300 engine was first bench-tested in 1963, and first flight tests were done on a modified Soviet Antonov An-12. After these tests proved to be successful, the new engine was installed in a HF 24 Marut to perform high speed tests. Once again, the development proved to be slower than expected and these final tests were done in March of 1967, which meant that only the third prototype of HA-300 was equipped with the new engine.
Parallel to the engine test, the frame of the new HA-300 was developed and the first prototype flew to Cairo on March 7, 1964, powered by a Bristol Siddeley Orpheus engine. Second prototype took to the skies for the first time during 1965, equipped with the same engine as the first, while the third and last prototype was fitted with the newly developed E-300 engine, with hopes that the new plane could achieve mach 2 at an altitude of 12 000 m, 2/5 minutes after takeoff.
In the meantime, in order to address the human factor, 2 Egyptian pilots were sent to Indian air force test pilot school, where they flew in a modified Marut fighter that was provided for the E-300 project. These pilots would be the first to fly the new Egyptian interceptor, and would have the further obligation of training the new Egyptian Air force pilots.
The first two prototypes had a top speed of Mach 1.7 (2,100 km/h), with the E-300 engine prototype achieving at least Mach 2. The projected range was 1,400 km (870 mi) at the altitude of 18,000 m (59,100 ft). Ha-300 was to be armed with 2 30mm Hispano canons, or 4 23mm Nudelman-Rikhter NR-23 cannons. In addition, it would carry 4 infrared homing air-to-air missiles.

One of the reasons for the delays was that the current HA 300 design had to be altered to accommodate the new engine.
The whole project relied on procuring parts from various countries, mostly Soviet Union and India. The soviets resisted the development of the new Egyptian aircraft, since the Egypt bought most of its military material from the Soviets.
Dr Adel Elsaie, one of the Egyptian engineers that were developing the new aircraft, recounted one of the anecdotes in his memoires:

Before the 1967 war with Israel, we were testing the MIG 21 and our Interceptor HA 300. We found out the MIG 21 was not capable of intercepting the Israeli aircrafts and come back to its base in Egypt. We told the Russian we need bigger fuel tanks for their aircraft. They said it was not possible, because the fuel tanks would increase the drag on the aircraft, and this would have adverse effects on its performance. We designed bigger fuel tanks for the MIG 21 and proved the Russians were wrong, (or lying). They asked us to scrap our modified fuel tank, and they would send us THEIR modified fuel tank! This was how we were dealing with the Russians.

This resistance to the development of the new aircraft was further complicated by the outbreak of The Six Day war in 1967. The war took a big toll on the Egyptian military capacity, and their air-force was literally decimated, after a series of surprise Israeli air strikes. 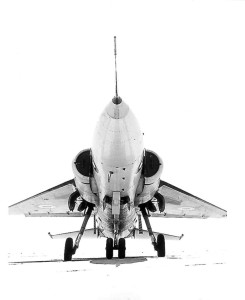 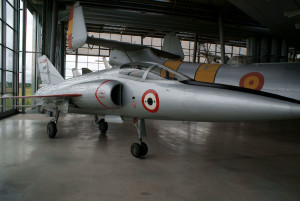 After the war the financial state of Egypt was bleak, and the Soviet Union continued to pressure the Egyptian government into buying their fighters, which they had in large numbers. Due to the lack of funding, and a need to have new fighters ready as soon as possible, Egypt caved in, and cancelled the project in 1969, just as the third prototype was entering final test stages.
The Ha 300 project cost the Egypt more than 135 million Egyptian pounds (more than 48 million US dollars at the time), and in the end all they had to show was a couple of museum pieces. Indeed, the first of the prototypes can be seen in the Deutsches Museum Flugwerft Schleissheim near Munich, Germany, where it’s been on display since 1997.
While the design was sound and development was the unfortunate political powerplay, the lack of funding deemed that this solid piece of engineering was never to seen use, making it just one of many failed cold war era military projects.