The Horten Ho 229 was the first jet engine light bomber design that came close to fulfilling the 3×1000 requirement set by vice-chancellor of Nazi Germany, Hermann Göring. The breakthrough design, characteristic by its flying wing look, could have had devastating effect on the allied forces if the Nazis managed to get it operational in time.
Birth of the first flying wing bomber 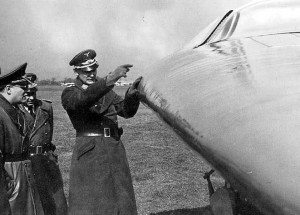 The story of the Horten bomber started early in 1930s when Horten brothers, Walter and Reimar, experimented with a tailless flying wing design on a number of different glider models. German interest in gliders and a large number of government funded glider clubs established at the time was due to the treaty of Versailles, which explicitly forbid Germany to research and develop any military or motorized aircraft.
With the start of the war, and breaking of the treaty, most of these clubs merged with the Luftwaffe, to form a formidable air force with a high number of trained pilots. While the Horten brothers weren’t involved in the Nazi air force development they were still privately working on their glider design between the 1941 and 1943, when they created four functional flying wing gliders designated Horton H.IV.
During the first few years of the war, and after the failed blitz aerial attacks on the Allied forces in Great Britain, Reichsmarschall Göring saw that the Luftwaffe would need a far more advanced weapon in its arsenal to maintain aerial superiority. In order to achieve this, he issued a request for a design that would satisfy the “3×1000” request. This request meant that a new bomber should be able to carry 1,000 kilograms (2,200 lb) of bombs, to a distance of 1,000 kilometers (620 mi) at a speed of 1,000 kilometers per hour (620 mph).
The main reason for this request was that the conventional German bombers could reach the British command centers in the U.K., but would suffer catastrophic losses due to the low speed that they would have to fly at to have sufficient range.
When the request was issued in 1943, no German aircraft could come close to fulfilling the needed prerequisites. The only Nazi engines that could reach the required speed were the newly developed Junkers Jumo 004B turbojets, but they couldn’t achieve the required range due to their large fuel consumption.
Enter the Horten brothers and their private project H.IX, a twin-turbojet-powered improvement they made on their previous flying wing glider H.IV. The Hortens established that their design would have much lower weight and drag then the conventional designs, which in turn would reduce the necessary power and fuel consumption during the cruise phase. The Ho 229 design would be able to satisfy all three of the required specifications, and it was the first Horton design that garnered significant interest from Reichsluftfahrtministerium (German Air ministry).

Why the Design Works 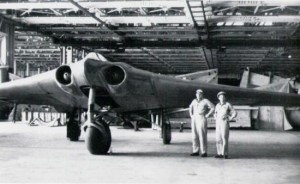 Inspired by the delta wing research done by Alexander Lippisch, Horten brothers wanted to push that design one step further. The philosophy beyond the flying wing design is that it removes unnecessary surfaces, greatly reducing drag and weight, which in turn decreases fuel consumption and radar signature. Since it lacked fuselage and any standard control surfaces, the craft was controlled by a complex system of elevons and spoilers located on its wings. The double spoiler system with the long-span inboard and short-span outboard spoilers allowed for a much smoother control than what a single spoiler system could achieve.
The Ho 229 had a center piece that housed engines and cockpit made out of welded steel tubing, while the wing spars were made out of wood. In order to further decrease the weight, wings were made out of plywood that was impregnated with graphite, and designed to sustain a 7g load factor. It had a wingspan of 16.76 m (55 ft 0 in), length of 7.47 m (24 ft 6 in), and height of 2.81 m (9 ft 2 in). In addition, it sported retractable tricycle landing gear, a drogue parachute to slow the aircraft during the landing, and an early version of ejection seat. While it was designed with the powerful BMW 003 engine in mind, the prototypes were equipped with the Junkers Jumo 004 engine, as the BMW engine was still in development.
It could carry two 500 kilogram (1,100 lb) bombs, R4M rockets, and 2 30 mm autocannons.
Reimar Horten believed that the charcoal dust that was mixed in glue and used to impregnate the wings and the body would absorb electromagnetic waves used by radar. That, combined with the much smaller cross section and an almost seamless design would give the bomber a much smaller radar signature, making it the very first stealth aircraft design.

Only three prototypes were created in total before the capitulation of Germany. The first prototype, designated H.IX V1, was an unpowered glider with fixed landing gear and flew on 1 march 1944. The test results were deemed satisfactory and the further design was assigned to Gothaer Waggonfabrik in order to make it ready for mass production. The Gotha team made changes to the engine inlets and cooling system, redesigned the undercarriage to increase possible gross weight and added a primitive ejection seat.
Second prototype was powered by the Junkers Jumo 004, and made a first test flight on 2 February 1945. Vice-chancellor Göring was satisfied with the test results, even before the first V2 test flight and ordered a production of 40 Bombers, with the new designation Ho 229. The V2 displayed good handling capability during the several test flights, with a fairly low lateral instability, which is a typical flaw of tailless aircraft.
With the V1 and V2 surpassing expectations, the last prototype was bigger than the previous ones, with slight modifications to the frame. It could carry two MK 108 30 mm cannons with the idea that the Ho 229 could be used as a fighter/bomber hybrid due to its high speed and good maneuverability. It had slightly more powerful Jumo 004C engines, and it was meant to be a template for the future mass production. 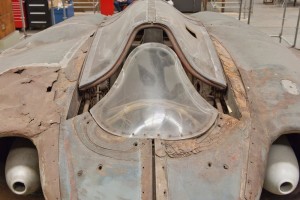 Unfortunately for the Nazis, Ho 229 never got to the production stage, as U.S. troops managed to capture the last surviving prototype, Ho 229 V3, while it was still in assembly. It was secured and sent to the United States, along with the Horton glider that was at the same airport.
After the tests and evaluation of the plane were done, it was donated to the Smithsonian National Air and Space Museum’s Paul E. Garber Restoration Facility where it was collecting dust until the December 2011. The restoration has begun, and when finished, the plane will be moved to the Smithsonian Steven F. Udvar-Hazy Center to be on display.
Parallel to this, Northrop-Grumman decided to create a non-flying reproduction in order to establish whether the plane really had stealth properties. 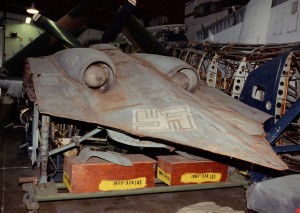 The effort was to be documented and televised by the National Geographic Channel. The tests, conducted at the test range at Tejon, California, proved that the Ho 229 would have a radar signature similar to a much smaller fighter Bf 109. After the tests were completed, this full-scale reproduction was moved to the San Diego Air and Space Museum
While it had no effect on the war effort, if the Nazis managed to get the Ho 229 to production before they were overrun by the allies, it would have posed a significant threat both due to its long range bombing capabilities, as well as its ability to go toe to toe with the enemy fighters.
The revolutionary flying wing design was so advanced that it wasn’t completely understood until recently, and there are still scientists at NASA that are doing extensive research on this particular model. The designers of the B-2, the
first operational flying wing took a trip to study the Ho 229 during development, almost 50 years later.