This aircraft was designed as a reconnaissance aircraft for the United States Air Force towards the end of World War II. Intended as a long range, high-altitude, and purpose built aerial reconnaissance aircraft that was configured as a twin engine / twin boom design. There was great initial excitement for the program and an order for one hundred F-11’s was placed when the design was initially proposed. 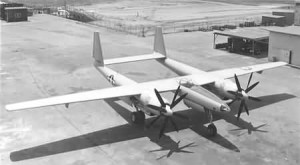 Due to stresses of war, the air force requested a new purpose built reconnaissance aircraft with the two main entrants being the XF-11, the Northrop F-15 Reporter and the Republic XF-12 Rainbow. The proposal of the XF-11 was accepted, and Colonel Elliot Roosevelt, who represented reconnaissance aircraft procurement, fast-tracked the approval process to General Arnold. Originally Hughes was excluded as a supplier by USAF Materiel Command due to its limited production capabilities, but due to intervention by General Arnold this policy was reversed.
The XF-11 was to be powered by two Pratt & Whitney R-4360-31’s in a dual boom configuration very similar to the Lockheed P-28. These radial engines drove a pair of contra-rotating propellers in the first prototype which was later modified to a pair of normal four bladed propellers in the second prototype. The constant problems with contra-rotating propellers, lead to the decision being made not to incorporate in the second prototype.
Two prototypes and one mock-up were built for development and testing purposes, after which an order of 100 XF-11’s would have been placed.
The contract was surrounded by controversy. Being both the company owner and test pilot, Hughes could not be seen as impartial. This and other controversial aspects of the contract lead the United State Senate to investigate the F-11 and H-4 Hercules contracts between 1947 and 1948. During the maiden flight of first prototype (tail number: 44-70155), Howard Hughes the test pilot, ignored the test program plans and remaining airborne almost twice the time planned for the tests. After onboard film cameras had already ran out of film, the right hand propeller controls developed a leak in the hydraulic system, causing the reverse propeller to reverse its pitch. Hughes made the mistake of maintaining full power to this engine, reducing power of the left engine instead of flying without the right engine. Hughes also made the mistake of keeping to fly away from the landing zone, even with the aircraft compromised. He eventually crashed the first prototype into houses close to the Los Angeles Country Club.
The test flight of the second prototype proved to be much more successful. The aircraft proved to be stable and controlled well at high speeds and altitudes. At low speeds, stability became problematic with the ailerons becoming ineffective at low speeds and altitudes.

At that time of the initial acceptance and testing, a small production order of 98 was already being discussed with Hughes. Unfortunately for Hughes, the USAF had other plans as the RB-50 Superfortress and F-15 were both capable of long range aerial photography and available at a much lower cost. This resulted in cancellation of any future orders and the remaining prototype being put into storage.
Eventually this aircraft was transferred to Shepard Air Force Base on the July 26th of 1949, where it was used as a maintenance trainer for ground crews. 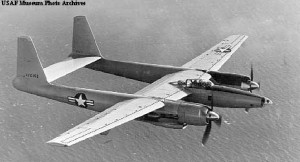 The XF-11 had a crew of two with one pilot and one navigator, who also doubled as a photographer. It was a massive aircraft for only two persons, with a length of 65 feet and a total wingspan of 101 feet. At its highest point it measured just over 23 feet and had an empty weight of 16 tons and could take off with the total aircraft weight being up to 26 tons. The two Pratt & Whitney engines produced a total of 2240 kW each. This allowed the airplane to reach speeds of to 450 mph and still have a range of 5,000 miles. It also had a maximum service ceiling of 44,000 feet, well out of range of most anti-aircraft guns of the period

Proving to be a very expensive, the cancellation of the XF-11 was one of the first items addressed when the United States Air Force was created formed independently of the United States Army. The XR-11 continued to undergo further testing in Englin Field Florida, but the production version was cancelled and the prototype was dropped from the inventory list in November 1949.