A Japanese experimental long range communications and transport aircraft, the Tachikawa Ki-77 was built in an attempt to break a distance record set by other Japanese airplanes. Oddly enough strong rivalries between newspapers to one-up each other resulted in the papers sponsoring airplanes such as the Ki-77 and the Ki-15. In fact the Ki-77 was originally designated as the A-26, with the A in honor of the newspaper Asashi Shinbun sponsoring the design.

The Ki-77, so designated by the Japanese Army Air Force, was an experimental low-wing monoplane powered by two twin-piston engines. The undercarriage was a standard tailwheel arrangement, making this plane somewhat difficult to pilot during takeoff but very easy to land. Initially the plane was intended for record-length endurance flight between New York and Tokyo, which was a feat few planes of that time could replicate.
Dr. Hidemasa Kimura oversaw the project as delegate from the Aeronautical Research Institute with the Tachikawa Company employed to build the plane. The final draft of this project was ready in the third quarter of 1940, with an anticipated first flight in early 1941. Unfortunately the further escalation of hostilities in World War II changed Japan’s priorities.
The design had a lot of technical advancements such as a laminar flow wing reducing drag and a sealed cabin, reducing the need for oxygen mask at high altitudes. Special cowlings also further reduced drag.
The engines of the Ki-77 suffered constant oil cooling problems which had to be rectified before a successful flight could be attempted. This pushed out the delivery date of the first prototype to July 1943. Another prototype was also constructed during this time, rectifying a lot of design problems of the first. 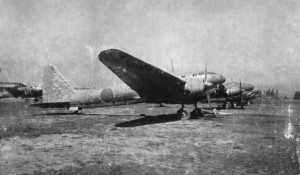 A short test flight from Japan to Singapore was successfully completed on June 30, 1943 which proved the aircraft’s capabilities and handling.
The second test flight was to land on the German airfield at Sarabus, a part of Russia that was under German control. The Japanese wished to avoid confronting Russia with airspace violations, thus did not take the great circle route, as was done by the Italians attempting this record with the Savoia-Marchetti S.M.75GA. The test flight was named Seiko (success) but Colonel Saigo considered it a suicide mission. 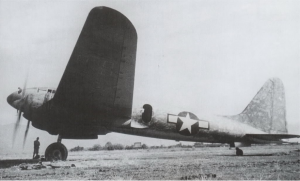 Ki-77 during postwar testing by US

The crew for this mission consisted of five personnel, two pilots, two flight engineers and a radio operator. They were well aware of the dangers of the mission and even carried poison tablets to kill themselves should they be stranded in enemy territory. The mission took off from Japan on July 7, 1943 but disappeared somewhere over the Indian ocean. It is presumed that British fighters intercepted this flight, as communications regarding this flight and the route was intercepted by ULTRA analysts at Bletchley Park. This slow, unarmored plane with no armament would not be able to defend itself against such threat.
With the war slipping away from Japan, a second prototype was in the hopes of inspiring the nation. On July 2, 1944, it flew 19 laps of a triangular route over Manchuria as a propaganda coup. Landing 57 hours and 9 minutes after taking off, the plane had covered a total of 10,212 miles with an average speed of 180 mph. This record was 2,174 miles further than the Italians SM.75’s record and the plane still landed with 800 liters of fuel to spare. This would have allowed the Ki-77 to fly even further, possibly up to 11,000 miles.
The record was however shortly beaten by a Lockheed P2V-1 Neptune flying from Perth to Columbus, a total trip of 11,236 miles. 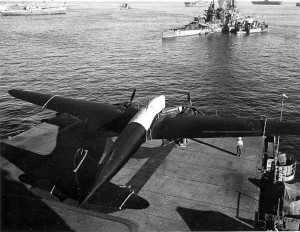 After the Hiroshima and Nagasaki bombings shortly after the record attempt, Japan surrendered. The Ki-77 was loaded on the United States carrier the USS Bogue and shipped to Alameda, California where it as examined and scrapped afterwards.
Unlike many of the prototypes listed on Untested Arms, this prototype was not built for direct combat. This plane was intended to boost the morale of a nation, and as a technology demonstrator for subsequent aircraft.