This aircraft could be said to have it all. Slender beauty, amazing cargo capabilities and, tandem landing gear which consisted of two sets of wheels installed directly in line with each other, not unlike a bicycle. Ground stability was achieved by means of two stabilizing wheels installed at the wingtips of its drooping wings. Designed for the Soviet Union by Vladimir Myasishchev, one can only wonder what the designer was thinking when he first decided on this undercarriage arrangement. The M-4, developed in secrecy as to surprise America with a long range jet bomber, is a great example of the paranoia of this period in history.

Development began in the early 1950s when the government establish a new military design bureau. Codenamed as the Hammer by the Russians and Bison by North Atlantic Treaty Organization (NATO), It was developed as a strategic bomber, able to
carry a large enough payload to drop nuclear bombs. 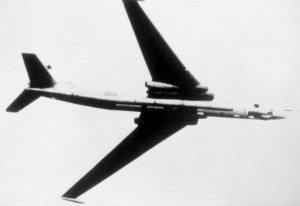 The M-4 had many design variants, with the most famous one being the 3M. This variant eventually developed into being an aircraft model in its own right, but the first 3M was a converted M-4 with more powerful engines. Most of the M-4 variants were capable of aerial refueling with some even serving as fuel tankers. The aim was to have a fleet of M-4’ both bombers and tankers, ensuring that the bombing capable variants were able to reach their targets and return safely. Some variants could even alternate between these two duties with a special bomb bay fitted refueling package.
Another specific variant of the Bison-C, had been converted to serve as a specialized search radar aircraft. The VM-T variant was aimed at carrying giant, oversized cargo in a pod installed on top of the aircraft. The tail rudder of this variant had been done away with, instead being replaced by two horizontal stabilizers with rudders at the wingtips to limit the effects of the turbulence. 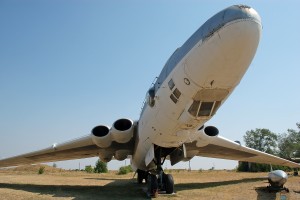 Due to the droop in the wings, there was no space under the aircraft available to install the massive engines and as a result the wings were designed to house the engines. The total wingspan of the initial design was just over 50 meters, with later variants being slightly larger. Originally the power plant of the M-4 had been four AM-3A turbojets, each capable of producing 8750 kg of thrust. Later this were upgraded to VD-7 engines which were lighter on fuel and produces 11 000 kg of thrust each. The original design could achieve a top speed of about 588 mph.
From front to back the original M-4 measured 47 m with a height of 14 m. It had a weight of 80 tons and could take of with a maximum total weight of 181 tons. Bombing variants of these aircraft could typically store up to 9 tons of bombs, but M-4’s designed for nuclear weaponry could have a total bomb cargo of up to 24 tons.
The original M-4 had a total of 9 23 mm NR-23 cannons. It could also carry up to four cruise missiles on the wings. Later, more powerful versions of the M-4 did away with some of these cannon to make the aircraft lighter and more economic. 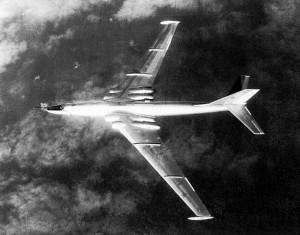 During a 1955 airshow, an American observer witnessed 28 Bison’s performing a flyby. They were also told about the much more powerful 3M engines, which in fact had yet to be fully developed.
During the airshow, a group of ten M-4 performed the flyby turning around as they were joined by an additional 8, making the observers believe 28 of these aircraft had already been produced and production is in full swing. When in reality a total of only 18 aircraft existed.
The American Central Intelligence Agency believed both of these pieces of counter-intelligence and estimated that over 800 powerful long-range bombers would be produced by the Soviets by early 1960. 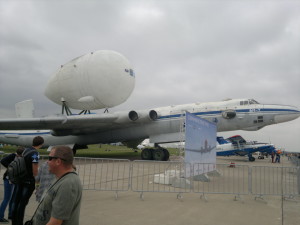 Fortunately a few airplanes survived the terms of the treaty with and aircraft on display in the Russian Air Force Museum located at Monino and another on display in the Long Range Aviation Museum in Ryazan. Two more variants, of the M-4 63 can be seen at Ukrainka Airbase and Engels Air Force Base respectively.