This formidable tank, built by the Soviet Union weighing in at a colossal 60 tons and was intended for cross-country terrain where normal tanks would have been ineffective. Built to last, it was designed in such a way that it could even withstand a nuclear explosion’s shockwave. Specifications and operational requirements were set out in 1956, and design work started during 1957. It was headed by the engineer L. Troyanov, working at the Kirov Plant in Leningrad 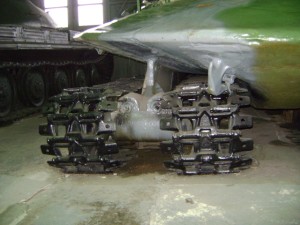 This unique tank features four tracks, with the running gear mounted on hollow beams, which also doubled as fuel tanks. A complex suspension system relying on hydro-pneumatics was installed. Even though this tank was very heavy it had very low ground pressure. This low ground pressure combined with a track train which was set up to run flat almost the entire track length, enabled the tank to take on soft soil, swamp and deforested areas, something not many tanks of that time could achieve. Weighing in at 60 tons also enabled it to easily barge through antitank defenses such as Czech hedgehogs which were designed to lift up the tank, effectively disabling it.
The overly shaped hull of the tank was one of its key features. It allowed the tank to withstand heavy shockwaves and remain aerodynamically sound enough in order not to be flipped over by the wave. It also served as a deflector for armor piercing ammunition, directing the blast away from the vehicle and armor to prevent damage. As sabot missiles and shaped charges, otherwise known as HEAT (high-explosive anti-tank warhead) were very popular at the time, this enabled the tank to have an advantage over other tanks.
Armor and Protection
Most of the bulk weight of the Object 279 was made up due to its thick armor. The tank was also domed by a thin, elliptically shaped shield in order to protect it against anti-tank ammunition with a maximum thickness of 9.4 inches. The solid casted frontal hull was rounded and covered in thin armor running into the sides of the tank. This rounded shape, together with the armor also served in protecting it from HEAT projectiles. Even the turret was solid casted, armored up to 12.5 inches and was covered in anti-HEAT panels.
Further protecting the tank was its ability to withstand attacks by biological, chemical and radiological attack. 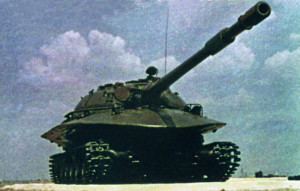 This heavy tank in both armor and weaponry, as it was armed with a 130 mm M-65 rifled gun. As customary on tank it was also armed with a secondary machine gun, a 14.5 mm KPVT coaxial machine gun, fitted with a magazine containing 800 rounds. The primary gun had 24 shells stored in the tank, but the charge and shell had to be loaded individually. Aiding in loading was a semi-automatic system, enabling the tank to have a primary weapon fire rate of up to 7 rounds a minute.
Stability control during firing was achieved by a Groza stabilizer, a two plane stabilizer ensuring the tank does not veer of course when firing.

Powering the drivetrain was a powerful 2DG-8M diesel motor producing a thousand horsepower. This allowed the tank to achieve speeds of up to 55 km/h with an active range of 300 km. It weighed 60 tons and had a total length of just under 22 feet without the gun barrel, which extended for further 13 feet in front of the tank. It had a crew of four, with specific roles of driving, loading, gun control and general commander being assigned.
Design Deficiencies
Serious design problems with the running gear appeared while these tanks were in their testing phase. Sluggish turning and efficiency loss in swampy terrain were the two main concerns. With the complex suspension and gearbox, production and maintenance cost were much higher than was originally anticipated. Maintenance required highly skilled personnel reducing the effect of in-the-field maintenance and requiring additional support services.
Additional the high height profile of these tanks was impossible to reduce, making transportation such as rail or via flatbed much more difficult. 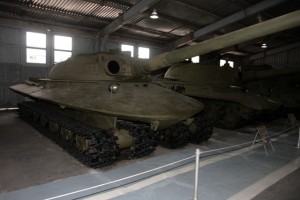 On July 22, 1960, Nikita Krushchev, who has served as the First Secretary, strictly forbade the use of tanks over 37 tons, effectively killing of the program in its infant stages. This decision was influenced by the perceived threat to homeland security, as tanks not being able to cross the Soviet Union’s own bridges would not be of much use.
With no more government support, these heavy tanks were no longer required by the military and all design efforts were cancelled. One example of this tank has survived, and is currently being at the Kubina Tank Museum