Panzerkampfwagen VIII Maus was a Nazi super-heavy tank, the heaviest armored vehicle ever built. The ironically named Mouse weighed over 180 tons, and only two hulls and one turret were built before the end of the World War 2. This tank never saw any combat, and it is a question whether it would have made any difference if it did.

A Mouse is Born

The development of the behemoth tank started in 1941, when the Krupp family started their research on the Soviet super heavy tanks of the time. The Krupp were one of the biggest names in the steel and armament industry of the time, and they were loyal Hitler supporters. Their efforts were not in vain. 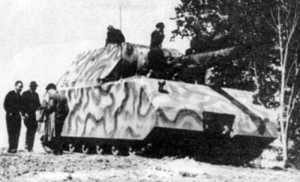 At the beginning of 1942, several new designs were created, such as a Tiger-Maus (VK7001) and the Panzerkampfwagen VII Löwe (Lion), but Löwe didn’t even enter the prototype stage. The main reason was that the Nazi military top believed that their military needed a bigger, heavier tank, if they were to win the war. And so, following the new order, Porsche received the contract for a new super heavy tank in March of 1942. The new tank, dubbed at the time VK10001 / Porsche Type 205, was to weigh at least a hundred tons, and store at least 100 rounds of ammunition. However, only few months later, in May, Hitler personally requested an even more ambitious vehicle, that was to be developed by Dr.Muller from Krupp and by Professor Ferdinand Porsche. Hitler wanted a 120 ton, heavily armored, indestructible tank, which was to be armed with a heavy 50 mm L/60 or 75 mm L/72 tank gun.
Krupp was to develop and produce hulls, turrets and armament, Porsche was to build powertrains, and another major German vehicle manufacturer, Alkett, was to be responsible for assembly. The first design iteration suggested a 150 mm main gun, but that was soon replaced by a 128 mm KwK 44 L/55 gun, based on the 12.8 cm Pak 44 Nazi tank gun, and another, coaxial, 75 mm L/36.5 gun
The first prototype was to be ready in May of 1943. After several more design iterations, and several new gun suggestions, which were ultimately rejected, the new tank weighed a whopping 188 tons. As agreed, a wooden mockup was presented to Hitler in May, and he approved a production of 150 of these tanks, at a rate of 5 per month. However, with the war starting to go in favor of the allies, the production got pushed back, and soon enough the whole order was cancelled. In the end only five tanks were ordered, and two were built.

How to Move a Monster

The biggest problem of the “Mouse” design was developing a powertrain powerful enough to power and actually move the tank, with the engine small enough to fit inside it. The idea at the beginning was to use a hybrid diesel-electric drive, similar to the one used in previous Porsche models, such as VK 3001, VK 4501, and Elefant. In this particular configuration, a diesel internal combustion engine was used to power an electric generator and electromotor that would in turn power the vehicle.
Since Porsche insisted on using a fully electric transmission in this tank, the driver was in the front, separated from the rest of the crew, with 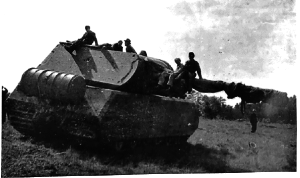 which he could communicate only via headgear. The Maus had extremely wide and thick tracks, narrow heavily armored hull, and this, combined with the space that was taken by the new drive system, meant that the interior was extremely cramped.
The new electrical drive train was designed to provide a maximum speed of 20 kilometers per hour (12 mph) and a minimum speed of 1.5 kilometers per hour (0.93 mph). These numbers proved to be in the ballpark of the actual speed achieved during field testing with the top speed between 13 and 22 kilometers per hour, depending on the strength of a motor field.
Due to its immense weight, the Maus was unable to drive over most of the bridges, since they couldn’t support it without collapsing. In order to combat this, the super tank was designed to be able to ford water up to 2 meters (6 ft 7 in), and to submerge in up to 8 meters (26 ft 3 in) deep water. In the case of submersion, the crew was to use a specially designed snorkel system. The other issue of its enormous weight was its equally impressive fuel consumption – this monster had a range of only 60-190 km (37-118 mi) while using 4,200 liters of fuel!

Thick skin, and Quite a Bite

Panzer VIII Maus was envisioned to be a “breakthrough tank”. The moving fortress that was supposed to punch through the enemy defenses, 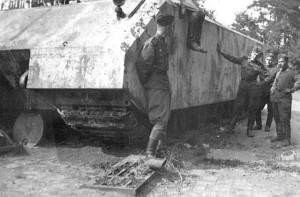 and create holes that could be than used by other forces to create havoc in the enemy lines. The main 128 mm cannon could destroy any type of allied armored vehicles of the time, at a maximum range of around 3,500 meters (3,800 yd). Besides its impressive armament, the Maus was heavily armored:
The front hull was 220 millimeters (8.7 in) thick, the side and rear hull were both 190 millimeters (7.5 in). The turret was even more heavily armored with the hull being between 250 millimeters (9.8 in) and 200 millimeters (7.9 in) thick.
Besides the main cannons, the final design also had a number of close combat weapons. It had a smoke bomb launcher mounted on the turret roof, a 7.92 mm (0.31 in) MG 34 machine gun with 1,000 rounds, and three pistol ports for submachine guns, one on each side and in the rear. There were also plans to include an anti-aircraft MG 151/20 cannon on the roof.
Captured before it fired a shot

The only prototype with a functional turret was ready for trials in March 1944. It was fitted with all the additional armament, and a new Daimler-Benz MB 517 diesel engine, new power-plant, tracks and suspension in September, but all this was too late. Just as Krupp was to start production of more hulls, the order came to cancel the production and testing of the Panzer Maus. 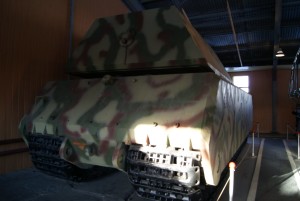 Even though the cancellation order came, the two available hulls were tested until their capture at Kummersdorf by Soviet forces. When the war was over, the Soviets decided to combine the only remaining operational turret and hull (one of the hulls was destroyed during the capture), and do further testing in East Germany. After the preliminary trials were over, some further tests were carried out in the USSR, near the town of Kubinka in 1946, where it now resides in the Kubinka Tank Museum
There is some speculation on what the role of this tank was to be, but according to Porsche, it was to be used to shore up coastal defenses on the western front, since its limited range and mobility wouldn’t have been as big of a factor.
The Maus design, while interesting, had a number of flaws that extremely decreased its combat value. It was too heavy, too slow, and with too short a range to be used effectively. This is one of the stories that prove that bigger isn’t always better.