During war, strategic resources are in short supply and items such as aluminum and steel are vital elements when constructing military or naval equipment. To help overcome this limitation, England and her allies encouraged their engineers and scientists to come up with alternative construction materials that could withstand the rigors of war. One of these ideas came to fruition as Project Habakkuk.
The project codename is a reference to the biblical book Habakkuk quoting a reference “be utterly amazed, for I am going to do something in your days that you would not believe, even if you were told”. The project was indeed ambitious, aiming to construct an aircraft carrier out of ice. This technique proven inferior due to plastic flow, a phenomena where ice would slowly flow, destroying the ship from within. To overcome this problem Geoffrey Pyke conceived the idea of Pykrete, a mixture of wood pulp and ice, a material much stronger than ice and one that could also be cast and milled into different shapes. 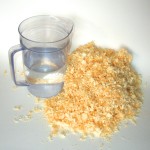 Pyke realized that ice could be manufactured for 1 % of the energy it takes to make an equivalent mass of steel and could be hollowed out to shelter aircraft. It was later determined that the optimal ration for Pykrete would be 14 % pulp to 86 % water
Construction began as a scale model prototype measuring only 60 feet by 30 feet which already weighed in at 1,000 tons. The work was kept highly secretive with different contractors doing each step with none of them connected to the military. With the prototype being constructed in Canada, plenty of wood pulp and icy water were readily available. This model would be kept frozen by a 1 horsepower chiller assembly.

As the project grew and more tests were conducted it became evident that a completed ship could not be delivered in time to meet the deadline, 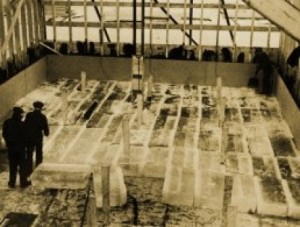 set at 1944. It also became evident that more steel reinforcing and a more effective insulating skin would be needed. With failure looming, Pyke was excluded from the project in an effort to gather American support, as Pyke had previous disagreements with American personnel.
As input on the project grew, the specifications became more demanding. The ship was required to have a range of 7,000 miles, be able to withstand record size waves and be torpedo proof. Heavy bombers would also be required to take off from the ship, requiring a runway of 2000 ft.
The original idea of steering Project Habakkuk was also challenged by the Navy. The steering of the ship called for varying the speed via use of electric motors, but the Navy preferred a more traditional rudder mount. Controlling and mounting such a huge rudder further complicated the problem.
Soon the Navy started revising the blueprints of the project. Habakkuk I would have been made entirely out of wood. This idea however was very short lived. Habakkuk II was dreamt up to be double the size of the original project, while Habakkuk III was proposed as a smaller, faster version of the original.
None however, overcame the fundamental construction problem Habakkuk faced. Even with wood and water being in ample supply, the amount needed would still impact other industries. The steel that the ship required for its reinforcing and cooling plant was also better used on more proven warship technologies.

During ballistic testing of a piece of ship hull, it was determined that a direct torpedo hit would only cause a crater of about 10 foot wide, insignificant damage for a ship proposed to be as large as Project Habakkuk. It would thus take a significant amount of firepower to sink this ship. Even then, the arsenal of aircraft the ship would carry, forty dual barrel turrets and numerous anti aircraft guns would be able to defend it with the enemy concentrating a lot of their war efforts on a single ship. Since the ship was made out of ice, it could also be repaired at sea, making follow up attacks less successful. 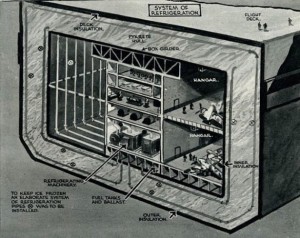 Fulfilling all these requirements meant that the ship would only be able to travel at an estimated speed of six knots, too slow for the Navy to deem it practical. It also used resources which were allocated to conventional ships (proven technology) versus the steel needed for its enormous cooling plant.
With the range of land based aircraft ever increasing, the need for this giant floating island became less and less appealing. Permission was also received from Portugal to use its airfields in the Azores, and the war effort turned in favor of the allies further negated the need for Project Habakkuk.
In the end the idea was abandoned due to the enormous production resources required and the development of the ship being plagued by several technical difficulties such as steering and speed limitations.
Even with the project being abandoned, it still took three summer seasons in the Alaskan sun to completely destroy the prototype Project Habakkuk.