Part boat, part plane, this flying boat was inspired by the successes achieved by flying boats during World War II. The SR.A/1, designed to emulate these successes, was built by Saunders-Roe for the Royal Air Force just after World War II ended. These flying boats, at least in theory, were ideal for the conditions in the Pacific, allowing any coastal calm waters to be turned into an airbase. 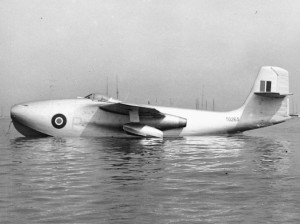 The main disadvantage that seaplanes had was their bulky floatation gear. This considerably downgraded their performance in relation to other fighters. However, as Saunders-Roe soon realized, the new generation turbojet engines of the time presented a considerable advantage. The turbojet had the advantage of not requiring a propeller, hence less clearance was needed. This made the plane sit much lower in the water, allowing it to use a flying boat hull.
In the second trimester of 1943, the company presented this concept to the Air Ministry, calling it SR.44. It would be equipped with a Halford H.1 engine initially, and was estimated to have a top speed of 520 mph at 40,000 feet. The Air Ministry did not fully agree with the design, stating that the wing chord ratios and thickness were not to the right for an aircraft operating at high speeds and altitudes. Saunders-Roe revised the design, and where awarded a contract to build three prototypes during May, 1944.
The first prototype made its maiden flight on July 16, 1947 with the others following shortly thereafter. During a demonstration flight at the 1948 Society of British Aerospace Companies, these planes demonstrated their capabilities, performing stunts such as inverted flight and aerobatics, which was not very common maneuverability for such a bulky plane.

The SR.A/1 only had space for the pilot, with the cockpit canopy being small with heavy framing. This designed resulted in criticism regarding the poor view followed, however this was never addressed. 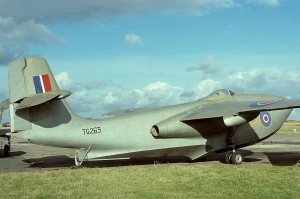 The plane had a length of 50 feet and a total wingspan of 46 feet and the final design relied on two Metropolitan-Vickers F.2 engines. These turbojet engines, running on kerosene were able to produce a maximum thrust of 17200 Newton each.
It had a maximum speed of 512 miles per hour, with a flight time of 1 hour and 48 minutes at this speed. The Saunders-Roe SR.A/1 was able to operate to a height of 48,000 feet. The airplane had an overall thrust to weight ratio of 0.48
The overall wet weight of the plane was 16,000 pounds, with wing loading being just under 40 pound per square feet. It had a total wing area of 415 square feet.
Aiding the pilot in mooring the plane, a system was designed to automatically moor the aircraft from within the cockpit, without the pilot even getting out of the cockpit
These prototypes were also outfitted with ejection seats. These Martin-Baker seats were the first two of these type of ejection seats being fitted to an aircraft. The seats had a troubled history figuring out ways to clear the tail of an aircraft at high speeds, with one incident leading to crushed vertebrae of a journalist who wanted to try out the test rig.

It was both a fighter and a bomber airplane, able to carry either two 1,000 pound bombs or rockets. In addition the plane was also outfitted with two 20 mm Hispano Mk 5 guns. These auto-cannons were able to fire explosive rounds, giving the plane a great advantage over planes of the era.

With the advances made by aircraft carriers, this plane had difficulty justifying its existence. The visibility from the cockpit, heavily strutted, also counted against it. To gain approval, Saunders-Roe argued that these carriers were still vulnerable, an argument which was increasingly hard to make.
The final step to project suspension came with Metropolitan-Vickers withdrawing from producing and developing jet engines. This left the seaplane without a production engine, which necessitated an entire redesign.
A resurrection of this design came in the form of the outbreak of the Korean War. Saunders-Roe redesigned the landing gear, instead coming up with hydro-skies, but this design never gained traction. 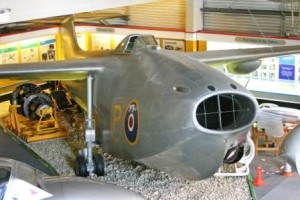 Unfortunately, the airplane never came as far as to have an official name, and was affectionately referred to by company employees as Squirt.
Two accidents, destroying two of the prototypes TG267 and TG271, and the design issues which could not be overcome, eventually lead to the project being cancelled.
The only remaining prototype, serial number TG263 is currently displayed at Solent Sky, an aviation museum in Southampton, England.