A unique fighter, a crazy idea maybe, but the supersonic Convair F2Y Sea Dart was designed to take a traditional seaplane design and into the jet age. It was the only seaplane to ever break the sound barrier and was designed in part due to the Navy’s skepticism of operating supersonic aircraft from an aircraft carrier. 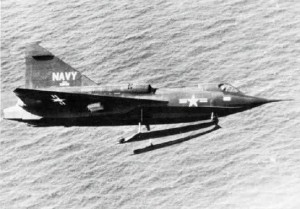 The Sea Dart was Convair’s entry into a Navy contest in 1948 for a supersonic interceptor program. Due to the technology at the time, supersonic interceptors required long runways, and during landing were often unstable and difficult to control combined with had high approach speeds, Convair proposed a rather bizarre approach. Instead of the airplane taking off and landing on a ship it would do so on water, with a ship only used for transport. This design came at a time when jet engines were still considered unreliable and had did not yet fully replace propeller-driven warplanes. Although many seaplanes already existed prior to this design, it was definitively breaking new ground for jet powered aircraft.

The Sea Dart, outfitted with a watertight hull would actually float in the water when stationary. As it started to move, it would still float with the wings’ trailing edges touching the water up to a point where it reached about 10 mph. As it started to exceed this speed, hydro-skis were deployed lifting it from the water allowing for minimal resistance against the water. To counter-act water spray when accelerating in the water, air intake for the twin engines were situated high over the wings. The salt water spray reduced thrust dramatically and needed to be managed, therefore a system of fresh water injectors were installed to purge the salt water spray from the turbojet compressors
Throughout its prototyping in 1957, various ski-configurations were tested, with a single-ski layout coming out on top. This skis however was not the brilliant idea as it first seemed anymore. Violent vibrations plagued takeoffs and landings, although later revisions of these skis improved the situation somewhat. 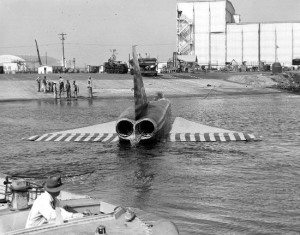 Powering this delta-wing interceptor would have been two Westinghouse J46-WE-02. In the original design these were specified, but the engines installed for the prototype were two J34-WE-32 engines since the XJ46 was not available as a prototype unit yet. The J34 engines, only producing 3,000 pounds of thrust, were severely underpowered, coming in at just over half the power of the original engine design. With the design of the aircraft, transonic drag was too high for the engines to accelerate the aircraft to supersonic speeds. This, and the fact that military technology advanced to a point where supersonic aircrafts could in fact be operated directly from a carrier caused interest in the Sea Dart to wane slowly. Development of the prototypes however, still continued.
The plane was designed to have a maximum speed of 825 mph with a range of 446 nautical miles. It could also takeoff from a water strip of 5,500 feet.

The original plan was altered to concentrate only on one prototype, which was then built and made to fly. Speeds in excess of Mach 1 were recorded, but the sound barrier still eluded the Sea Dart during stable level flight. On November 4, 1954, tragedy struck the project. Sea Dart BuNo 135762 broke apart midair while its test pilot, Charles E. Richbourg where showing off the airplanes’ capabilities to Navy officials. He unknowingly pushed the aircraft beyond its design limitations causing the airframe to fail and break apart. Even though he was rescued from the water almost immediately, he was fatally injured before striking the water.
The Navy considered using submarines to transports these airplanes, and only transferring them to the water when need. This consideration was however aborted when engineers realized how much they would weaken the hull of the submarine with a door and elevator large enough to be used for this airplane.
The Sea Dart was to be outfitted with four 20 mm Colt Mk12 cannons and two Fin-Fold air to air missiles. Firing tests of the weapon system, however was never commenced. 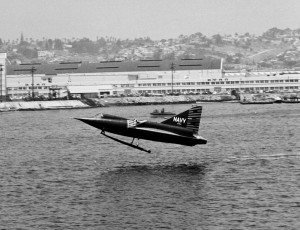 During testing while performing, what was supposed to be a fast taxi maneuver, the airplane took off, making this the first unofficial maiden flight. The official maiden flight however was performed on April 9, 1953.
The oleo legs, which was supposed to act as shock absorbers, did not dampen the dramatic vibrations caused by the water at high speeds, making the airplane difficult to control during this critical transition phase. Several taxi test, takeoff and lading tests where performed with different ski configurations and it was established that the average take off time for this aircraft from a standstill in the water was about 23 seconds.
With the Navy already losing interest in this project, the crash was the final factor in deciding to move this project to an experimental status. All production aircraft were cancelled, although the other three service test examples was successfully completed. The final two prototypes that were produced however, never flew.