This ship seemed to have suffered from an identity crisis as its purpose and design evolved over the war. Nazi Germany had started construction of this ship before WWII as a light cruiser. Due to the war, construction on this ship ground to a halt when she was nearly finished in mid 1940. This saw the ship laying in the shipyard up until 1942, when the Kriegsmarine, deciding to convert her to an auxiliary aircraft carrier and renamed the Weser. 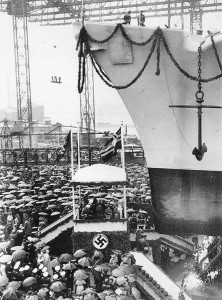 The original name, the Seydlitz was chosen in honor of Friedrich Wilhelm von Seydlitz, one of the greatest generals of the Prussian Army. This ship was designed to utilize more of a guerilla-style tactics, attacking merchant ships and avoiding Allied ships. Its engine design limited its range compared to its Allied counterparts. This, and the fact that it normally sailed as a singular unit made this ship much more suited to cut supply lines than to take an offensive stance.
The original plan was to complete a light cruiser version of the Admiral Hipper class of ships, which were German’s premier heavy cruisers. Reduced armament and armor plating would make the Seydlitz lighter and faster, something the Germans believed would give them a competitive advantage. The Kriegsmarine however revised this decision and decided to upgrade the ship to an Admiral Hipper class heavy cruiser, a decision taken when the ship nearly left dry-dock.

After the loss of the Bismarck during May 1941 Nazi Germany started considering adding aircraft carriers to its fleet. The near torpedoing of the Bismarck sistership, Tirpitz, in March 1942 led to the final decision that this strategy should indeed be followed. With the Graf Zeppelin already under construction, the Seydlitz was selected for conversion into an aircraft carrier along with a few other ships.
The conversion started during December 1942 where she was stripped of her superstructures and weapons. Various other parts of the ship were also cut away to allow the flight deck to be properly built and supported. For an auxiliary carrier, she was set to provide sufficient airpower in the form of 10 modified BF-109s and 10 JU-87s operating from her deck.
With the flight deck taking up most of the space and the hangers and aircrafts that were planned strained the carrying capacity of the ship, her original armament of guns had to be reduced significantly. Instead of the 36 guns originally planned, only a group of much lighter guns had been installed. These consisted of ten 4 inch, ten 1.5 inch and twenty four 0.79 inch guns which were to be used for anti-aircraft fire.

Unlike modern cruisers which use mostly diesel, the Seydlitz was powered by a set of three Blohm & Voss geared steam turbines connected to high pressure boilers. These twelve boilers were in turn fired by fuel oil. Driving the ship was three giant three-blade propellers. Technological advancements on this ship included a beam navigation system which guided aircraft back towards the ship and was called a “Knickebein”. The catapult system had also been greatly improved from what was installed on the Graff Zeppelin.
The ship could achieve of 32 knots at full speed with the three turbines delivering a total of 100,000 hp. However, with the use of ultra high pressure boilers, this power came at the price of fuel efficiency.

The Seydlitz measured a total of 690 ft. with a beam of 71 ft. Her draft when fully loaded was almost 26 feet. She hosted a complement of 42 officers and 1,340 crewmembers. Designed to be a lone ranger, she had thick armor, with belt armor being in the region of 2.8 to 3.1 inch thick. The deck of this aircraft carrier had also been armored with armor thickness ranging between 0.8 and 2 inch. The turret faces was protected by a thick 4.1 inch armor
One unique catapult was fitted. The first of its kind, it built up kinetic energy through the use of a torque converter driven by two aircraft engines. Once released, this kinetic energy would real in a deck shuttle at speed, unlike modern carriers that pushed a shuttle forward by using high pressure steam. Its fleet of 20 aircraft were originally both land based models which had been specially modified with arresting gear and longer wings, enabling it to take of and land in shorter spaces.
Originally, the ship had also been designed with torpedoes as part of its armament, but this feature had not been included in its conversion from a cruiser to a carrier. The 4.1 inch guns had been included however, and were mounted side by side, with two units forward of the tower. The 1.5 inch guns were also mounted as pairs. Lastly, the 0.79 inchers were mounted across the deck as quadruplets.

The still uncompleted Wesser (Seydlitz) was transferred to Königsberg where work on her ceased in June 1943, due to Nazi Germany’s shifting priorities.
To protect the ship from hostile take-over it was scuttled on January 29, 1945, preventing the advancing Soviet Forces from taking the ship. These Soviet forces briefly considered using the spares to finish its own ship, the Lützow, purchased from Germany before the war as an uncompleted project. This plan however, never came to fruition and the Wesser was broken up for scrap metal.