Although named as a tank, this heavily armored self-propelled gun initially did not conform to the tank naming conventions of the time. With no revolving turret, it didn’t classify as a tank, while the heavy armor disqualified it from being a self-propelled gun. It was therefore decided to name it a Super Heavy Tank. 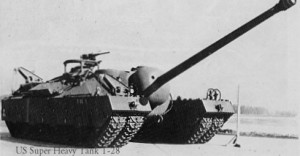 The US Army needed firepower to be able to break through the German defenses at the Siegfried Line, which was a defensive line established by Germany that stretched 390 miles and had thousands of tunnels, bunkers and tank traps. Additionally, this was also a weapon that the American’s could utilize during the planned invasion of the Japanese mainland.

Having the same superstructure as the original T23, five prototypes was planned. These prototypes was to lay down the groundwork for a production run of 25 tanks. An agreement was reached in March 1944 to build five of these tanks. Pacific Car and Foundry was chosen as the company to manufacture these tanks and was handed the blueprints for the tank in March 1945. The first welded hull was available in August, but by the time the first tank was completed, the war was already over. This led to the initial five prototypes being reduced to only two.

The two prototypes were completed and were put through their paces at Fort Knox and Aberdeen Proving Grounds until 1947. At the end of these trials, only one prototype remained, the other having been damaged beyond repair as a result of an engine fire during testing at Yuma Proving Ground.

The weight of this tank necessitated the use of four tracks, instead of the two normally found on ordinary tanks. Weighing in at a hefty 95 tons, this vehicle exerted too much ground pressure for an ordinary track arrangement, so additional tracks were added which protruded beyond the hull.

Being so heavy, caused many problems by itself. The tank was severally underpowered, had virtually no obstacle crossing ability, and exceeded weight limitations for portable tank bridges. It’s redeeming quality though was its serious firepower. 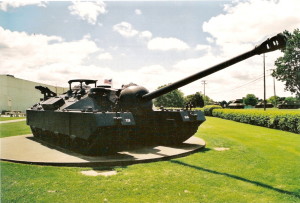 The gun, a 105mm T5E1 gun firing from a casemate style hull had the firepower needed to break through heavily fortified defenses. Since concrete was no match for this high caliber gun, it was chosen as the caliber for the T28 Super Heavy Tank. The casemate assembly gave this tank a low profile, not much different from the Jagdpanther, a contemporary German tank destroyer. The gun was set in a ball-shape mantlet which allowed for only a limited transverse of 21 degrees from left to right and 24.5 degrees top to bottom. One advantage of this arrangement was the ability to point the turret 5 degrees below the horizontal position, allowing firing from an elevated position.

The second gun, a .50 caliber Browning, served as both a light infantry and personnel defense. It could also be used as an anti-aircraft weapon.
The armor consisted of plating up to 12 inches up front, which was considered sufficiently thick to allow protection against the German tank, and anti-tank guns. The lower hull, sides and suspension had less armor protection, but was still covered in 4 inch steel skirts.

Powering this mammoth tank was left up to the Ford GAF gasoline-powered V8, which delivered 500 horsepower at low revolutions. Getting the power to the tracks was tasked to a Torqmatic transmission. Enabling the tank to even move, the gear ration of this transmission brought the top speed down to about 8 mph. This arrangement gave the tank an operational range of about 100 miles.

By the end of the testing period, one tank had been broken up and sold as scrap metal. The other tank did not seem to have a very bright future. Slow, with a fixed weapon system meant it was not a very easy weapon to operate, requiring careful planning to be effective. The War department stopped development of the T28 in October 1947 citing weight as its primary objection to the project. It was however kept in serviceable condition to test component durability in heavy vehicles. 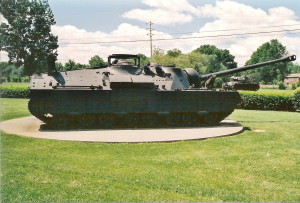 A T28 was discovered at Fort Belvoir in 1974, left abandoned in a field. No one knows where it has spent the previous 27 years

This tank, the only one left, after the second prototype were destroyed, was first visible to the public at the Patton Museum in Kentucky. Currently it is on public display in Fort Benning in Georgia.

I-400 Submarine – The Largest WWII Sub