Nazi Germany was, innovating with all their weapon designs. Besides all the standard weapons developed during the war, there was a number of weapons that really define thinking out of the box. One of these guns is the V-3 cannon (Vergeltungswaffe 3), a special super long cannon that was supposed to bombard London all the way from the north coast of France.

Another way to Bombard London

At the beginning of the World War II the Nazi Germany was confident in their power, and believed that they would manage to destroy Great Britain, by destroying the English infrastructure in a series of bombing raids. The English survived this blitz attack and, to German dismay, proved to be a much tougher opponent that was able to fight back. With the blitz tactic faltering in its effectiveness the Nazis were forced to rethink their approach and strategy. 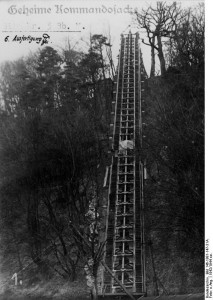 V-3 was a new installment in the program of the so called vengeance weapons, created by Nazi Germany to terrorize the allied forces and civilians. The London gun was an idea that was easy to sell to Hitler, as he wanted to achieve what his bombing blitz at the beginning of the war failed to do. It was conceived by one of the Germany’s leading steel and armament companies, Roechling, and the first prototype was built in 1941.

After the prototype was built, the construction of the first V-3 cannon started in August 1942. The head of the project was August Coenders, an experienced engineer, who studied old French designs from the First World War in order to develop a new Nazi superweapon. These designs described a multi-stage long range cannon that was meant to rival the Paris Gun, also known as Emperor William Gun, used by the Germans in the bombing of Paris in 1918.

A gun that would put Big Bertha to shame

The new gun, based on the outdated French design, used additional propellant charges, which were placed in the side-chambers along the barrel’s length, and were timed in such a way to fire in succession as the projectile passed them, in order to provide additional speed and range to the fired shell. Since the timing and shaping of the explosive charges presented problems, solid fuel charges were deemed more suitable and used instead. These charges were placed in pairs on the both sides of the barrel, and angled in such a way to push the projectile forward as it was passing.

Since the whole weapon was to be extremely large, it was decided that 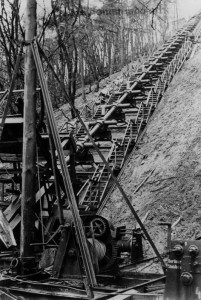 the best way to construct it was to manufacture identical sections of the barrel and side-chambers that can be bolted together, in order to form the full length of the barrel. This would in addition allow much easier replacement of a damaged section, without having to replace the whole barrel.

The V-3 was one of the few smooth-bore weapons of the time, which meant that the shell that was fired had fins to stabilize it during flight, rather than the gyroscopic effect caused by rotation in rifled weapons. Besides simplifying manufacturing, the smooth bore approach had the benefit of lowering the drag coefficient, which further increased the gun range. When fully constructed and ready to use, the cannon was to have a 416 feet long barrel and fire a 140kg, 9 feet long shells at the rate of 300 hundred shells per hour.

A shot that wasn’t heard around the world

The development and construction of the cannons took longer than expected and the whole project came under the control of the SS General Hans Kammler who wanted to have fully operational weapons by the end of 1944. The Nazis built a battery of 2 scaled down V-3 cannons in a ravine of the Ruwer River, near the German-Belgian border, 13 kilometers (8.1 mi) southeast of Trier in Germany. These canons had a 50 meters (160 ft) barrel with 12 pairs of side-chambers set at a 34 degree angle, connected by steel supports to a wooden foundation.

With the Battle of the Bulge on the horizon, the time for the proper set-up of the weapons was over and it was decided to use lighter sabot projectiles with a much greater explosive charge. The 150-millimetre (5.9 in) finned projectile weighted 95 kilograms (209 lb), with the total mass of propellant of 73 kg (161 lb) that was comprised of 24 subsidiary charges and a 5 kg (11 lb) main charge. 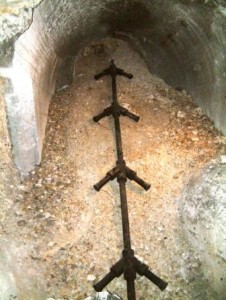 As the Ardennes offensive began, it was decided that the guns were to bombarding the recently freed city of Luxembourg. On 30 December of 1944 the first two shots were fired, as warm up rounds. These were followed by 5 explosive shells on the same day, and over the course of almost two months a total of 183 rounds were fired from the both cannons. The projectile velocity was 935 meters per second (3,070 ft/s) – less than a half of the velocity that would be necessary for the shell to reach London from the coast of France.

Even though there were 44 confirmed hits in the urban area, the cannons didn’t prove to be very effective:

Over 140 shells hit Luxembourg are and recorded casualties numbered 10 dead and 35 wounded.

Both of the guns were soon captured and dismantled by Allied forces, bringing to an end the whole operational history of this weapon.

The grand plan that failed

In addition to the guns constructed near Luxemburg, there was a second, more important battery that the Nazis were building during 1943 and 1944. The grand plan, created by Albert Speer, Minister of Armaments and War Production, was that the 50 of the full-scale V-3 guns were to be built into the hills near the hamlet of Mimoyecques in the Pays de Calais in the northern France. These guns were designed to fire in succession with five minute intervals for each gun to prepare for the next shot. The idea was that this battery would be able to shell London with 600 shots per hour, and in such a way conduct saturation bombing from a safe distance.

This site was discovered by British reconnaissance planes, and subsequently bombed by nineteen RAF Lancaster bombers on July 6th, 1944. These bombers from 617 Squadron dropped over 35 tons of bombs at the reinforced hillside, and some of the bombs managed to find their way into the gun barrel shafts and do extensive damage to the guns – enough to force the Nazis to abandon the project. 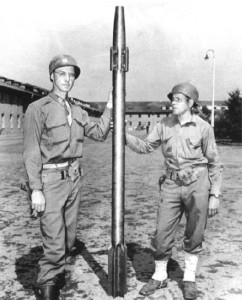 While this program was held in high regard by Hitler, many German ballistic experts were skeptical of its actual ability to achieve what it was designed for. The guns haven’t reached the sufficient muzzle velocity in any of the tests made, and the projectiles themselves would often flip over mid-flight, or veer off course. Even if the war wasn’t over by the time these guns were functional, they probably wouldn’t have made much difference as they were doomed to fail from the start.

Like many of the vengeance weapons, the development cost was substantially higher than the battlefield impact. In the end, London would remain safe.