Intended to be deployed from another aircraft, the XF-85 was a small parasite fighter intended to protect its host aircraft from hostile interceptors. With no landing gear, the aircraft was completely dependable on its host aircraft to both take-off and land. During the period where this plane was developed, next generation bomber airplanes (such as the Convair B-36 and the Northrop XB-35) had a much longer range and a support aircraft was desperately required. As such this aircraft was developed in response to the limited range of other interceptor aircraft, as aerial refilling was still in development and considered an unnecessary risk.
The XF-85 was not the first parasite fighter to be considered by the United State Air Force. In the 1930s, the Curtiss F9C Sparrowhawk had been installed in a parasite arrangement aboard the Akron and Macon airships. Although the military life proved to be short, it proved the concept and operational model.

A number of different options, most notably the use of remote piloted aircraft, had been considered before the USAF finally decided on a parasite aircraft design to be incorporated into the B-36 design with the request for proposals being send out on December 3, 1942. At first the requirement for the parasite aircraft had been for a piston powered engine, but this was soon revised to jet propulsion as it became clear that piston powered aircraft would be insufficient.
McDonnell was the only company submitting design proposals for both requirement revisions. Their first design of the Model 27 was to be carried under the fuselage of the B-36, but due to aero dynamical incompatibility, this design was rejected. On March 19th 1945, McDonnell’s design team proposed their revised design, a small egg shaped aircraft named the Model 27D. This small aircraft had three fork-shaped stabilizers for its vertical stability, horizontal stabilizers and foldable swept back wings, allowing it to be stored inside the bomb bay.
To bring balance to a bomber fleet, some of the B-36’s would be carrying the XF-85 while others would be purely used as bombers. 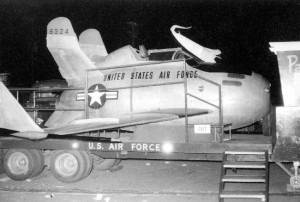 A letter of intent was signed on October 9, 1945, covering engineering and prototyping of two XF-85’s although the final contract was not ready until February 1947. Successful conclusion by USAF engineers of two wooden mock-ups built in 1946 and 1947 meant that McDonnell could construct two prototype units, which was ready for further testing during the last months of 1947. At this stage, the aircraft was still referred to as the Model 27D, however that was changed to XF-85 to comply with new USAF naming conventions. Additionally a name, “Goblin”, was also awarded to this small aircraft. The United State Air Force, also placed a preliminary order for 100 Goblin aircrafts should test results of the prototypes be conclusive. 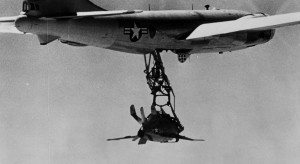 During wind tunnel testing one XF-85 was accidentally dropped, significantly damaging the fuselage and air intake. Further flight tests were conducted with a modified EB-29B Superfortress as no production Convair B-36 was available at that time. Since the design of the EB-29B was much smaller than that of the B-36, the aircraft had to be tested half-exposed. On July 23, 1948 this combination flew the first of five flights, which was designed to test whether these two aircraft could fly in a mated arrangement and also give the test pilot a feel for the XF-85. The first free flight of the parasite aircraft was performed on August 23, 1948. In this test the XF-85 was released at an altitude of 20,000 feet after which a ten minute long flight test was performed.
The aircraft was to be directly launched and retrieved in flight. This would be achieved by a trapeze design. The parasite was to be started outside the mother ship, being towed under the aircraft attaching with a hook. To disengage, the pilot of the parasite would simply pull up the nose a little retracting the hook after successfully completing this operation. Docking with the mother ship, would essentially be a reverse of this operation, seeing the pilot approach the mother ship from underneath and hooking into the trapeze again, after which it was raised back into the fuselage. 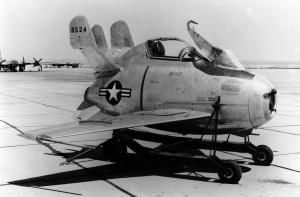 However, aircraft retrieval was not as easy as conceptualized. After the first free flight, which was testing control and manoeuvrability, the test pilot attempted to re-dock with the modified EB-29B. The XF-85 was affected by the turbulence created by the mother ship and an air cushion which was created when the two aircraft flew in such close proximity. After the third attempt to attach to the trapeze, the test pilot miscalculated his approach speed and smashed into it. This ripped off his helmet and mask, yet he stilled managed to save the prototype by making a belly landing with the reinforced skid that was attached to the underside of the aircraft during testing. During repair of the aircraft the test pilot practised dummy docking using a Lockheed P-80 Shooting Star.
After repairs and modifications to the aerodynamics were complete, another two mated flights had been flown to test compatibility. The first successful release and hook-up was performed in October, 1948. The next flight test however, saw the pilot experience the same hook-up difficulties, eventually miscalculating his approach after many unsuccessful attempts. This caused the XF-85 to hit the trapeze bar with enough speed to break of the hook, forcing the pilot to perform another belly landing at Muroc.

The XF-85 was outfitted with a total of four M3 Browning machine guns. This was a rather light armament and the aircraft would be outgunned when compared to contemporary interceptors

This small aircraft had only enough space for the pilot. It had a total length of 14ft and a wingspan of 21 ft. An empty weight of 1.7 tons and a loaded weight of just over two tons make this one of the lightest fighter jets to be produced. The XF-85 was powered by a Westinghouse XJ-34-WE-22, a turbojet engine able to produce about 13 kN of thrust. The craft was estimated to have a maximum speed of 565 knots.

This aircraft, although proving successful in flight testing, proved to be extremely difficult to successfully dock. Since the XF-85 lacked landing gear, a belly landing would cause expensive damage on a production model and add further risk the pilot. 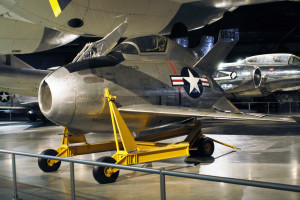 With the advancements of in-flight refuelling and the lack of performance when being compared to other aircraft, the XF-85 and the project was cancelled. A total flight time of only 2 hours and 19 minutes was recorded between the two Goblin prototype units.
Following the project’s cancellation, the remaining prototype was transferred to the United State Air Force Museum where this parasite fighter is on display with the Convair B-36, its intended host aircraft.