This aircraft was to be the US Navy’s next great torpedo bombers in World War Two. As new aircraft carriers grew in size, this allowed for larger and more improved upon aircraft to be utilized. The Douglas Aircraft Company receiving the contract on October 31, 1943 which allowed them to build upon their past aircraft design experience. At the time of the contract, Douglas had designed and built the DC-3 but was also a major builder of other designs such as the SBD Dauntless dive bomber and the B-17.
The original project was code-named the Devastator II, but the Navy classified it as the TB2D, officially naming in the Skypirate. It was to be the biggest carrier-based aircraft of that time, with an enormous weapon carrying capability. 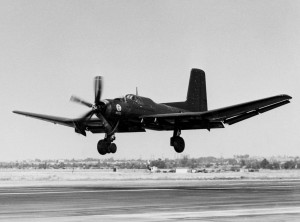 The main purpose of the Skypirate was to serve as a torpedo bomber however it would also double as both a reconnaissance plane and ordinary bomber. With its large carrying capabilities it would be well suited to carry several torpedoes into battle. The current standard for a torpedo bomber of the period was to carry and fire only a single torpedo, making this aircraft vastly superior to any other.
Initially, this aircraft was designed as a twin engine variant, but due to various design issues, this approached was cancelled in favor of a more powerful, single engine arrangement with contra-rotating propellers. These large 14.3 foot propellers was to be driven by a Pratt & Whitney XR-4360-8 radial engine with a supercharger pushing out 3000 hp. To function as a multi-disciplined plane, an internal bomb bay was also part of the original design, however was not fully developed.
The wings on this aircraft were highly complex as they had to fold for storage on the aircraft carrier. However, each of these wings also had two hard points which could be used to carry 2000 pound torpedoes and plumbing for use of jettison-able fuel tanks to further increasing the aircraft’s range.
The original design called for numerous 50 mm Browning M2 machines guns to be installed. Each wing was to be fitted with a total of two forward facing Browning’s. A dorsal station was also planned, featuring two Brownings. 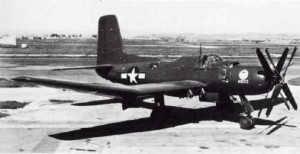 Constant delays plagued the project and the first of the two planes was not ready until April 1945 with the second plane being delivered in December. Due to delays in the Midway class ships, design and build of this aircraft was slowed to ensure the systems worked together.
Ultimately test flights were a great success but the 23 planes that had been placed on a preliminary order pertaining the successful testing, were not ordered. 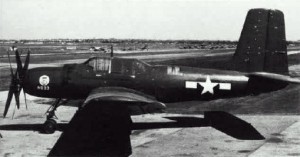 During the period of waiting for the Midway class of ships, the war turned in the Allies favor and the currently generation of Navy torpedo bombers was able to win the war in the Pacific. With Japan surrendering, the need for improved upon weaponry no longer existed. This ultimately led to all flight testing being cancelled and the project scrapped. The two prototypes which were previously created were reduced to scrap metal in 1948.