This surveillance aircraft was the US Army’s attempt at creating a successful aircraft with vertical take of and landing capabilities (VTOL). Designated by Lockheed as the VZ-120, and classified by the military as XV-4, this aircraft produced lift by directing thrust from its two engines downward. This was done through valves, which was able to transition the aircraft from lift producing thrust to forward thrust. Controlling pitch and yawn was done by adjusting the airflow, carefully monitoring the flow of gas in order not to change the overall lifting thrust.

The first flight testing on XV-4A started at July 7, 1962. Tethered testing occur up to 30 November after which the first free hover was achieved on May 24, 1963. A first true takeoff, lifting and moving forward, was achieved on November 8, 1963. During testing it was noted that the XV-4A was severely underpowered, not achieving the desired weight to lift ratio. The final test concluded on June 10, 1964 when this underpowered craft fell from the sky, destroying the plane and killing the pilot. 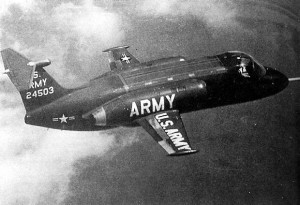 The Hummingbird XV-4B improved on the XV-4A’s failures and an entire redesign of the controls, engines, even the wings was undertaken. Learning from previous mistakes the XV-4B also had reaction control valves providing failsafe operation to the engine. This implemented cross linking between the two main engine ducts to effectively control lift in the event of one of the two main engines failed.
Another mayor change was the addition of 4 turbojet lift jets. These engines faced vertically adding much needed thrust during takeoff, but were shut down during normal flight. The design implementation had been criticized for adding too much dead weight during flight, but the system was considered the best implementation when considering the failures in the first prototype. The two main engines were still able to provide both vertical and horizontal thrust by the use of two diverter valves.
Design engineers also added stability control and improved the controls, which in turn gave the pilot a much better feel for the aircraft by enabling the use of fly-by-wire technology. Conventional systems were still present, but only served as a backup. Improper wiring plagued the XV-4B but even still it performed much more reliably with electrically operated hydraulics replacing the bulky hydraulic systems of the XV-4A. 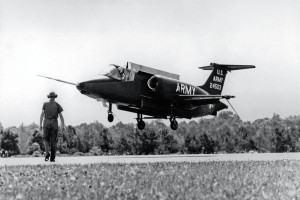 The second prototype was built and modified to the new standards of XV-4B from 1966 to 1968. It also had an ejector seat installed, allowing safe evacuation of the pilot in the even of an emergency. Testing the new aircraft started in August of 1968 after wind tunnel testing proved successful. Unfortunately, during a test performed on March 14, 1969, system failure led the XV-4B to crash. Due to the ejection seat, the pilot was able to escape unharmed.

With both versions of the prototypes ending in failure, the program came to an end which was not unusual for VTOL efforts of the time. The XV-5 Vertifan and the Rockwell XFV-12 were other military research efforts which ended in similar failure as the technology required had not sufficiently matured.