The MXY-7 Navy Suicide Attacker Ohka was a rocket propelled, manned kamikaze plane-bomb, meant to destroy US warships. Because of its suicidal nature, US sailors nicknamed the aircraft Baka, which means “idiot” in Japanese.

How to Make a Human Guided Warhead

With the war pressing hard against the Japanese, and the US troops at their doorstep in the summer of 1944, Japanese desperation was at an all high. For the first time kamikaze tactics have been proposed as an official attack tactic. Before that, Japanese pilots would intentionally crash in order to avoid capture, and only when their aircraft is too damaged to return to base.
The idea was initially refused, as well as the kamikaze in general, but with each allied victory, the resistance to this extreme program diminished. After one of the numerous defeats at the hand of the Allies, in the Battle of the Philippine Sea in June 1944, Captain Jyo, Commander of the Japanese Aircraft carrier “Chiyoda,” observed:

No longer can we hope to sink the numerically superior enemy carriers through ordinary attack methods. I urge the use of special attack units to crash dive their aircraft and I ask to be placed in command of them.

Soon after, the “Chiyoda” was sunk and the command of the newly formed Special Attack Group (shimbu-tai) kamikaze fell to the admiral Takijiro Ohnishi in october 1944. The first kamikaze pilots flew in the conventional Mitsubishi A6M Zeros, with the 500kg bombs strapped to the aircraft.
With the official acceptance of the kamikaze philosophy, proposed by the Captain Motoharu Okamura, a logical, but grim development could be expected. An ensign from the 405th Kōkūtai (air group), Mitsu Ohta proposed a design for a rocket propelled suicide bomber, later known as the MXY7 Ohka. 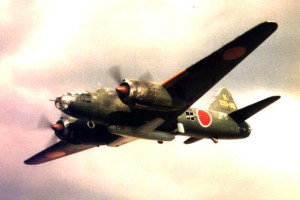 The Ohka, which means cherry blossom in Japanese, was a fairly small aircraft with a very short range. These piloted warheads were carried by a parent aircraft, usually under a belly of a Mitsubishi G4M2e “Betty” Model 24J bomber.
The cherry blossom was made mostly out of wood, with an aluminum frame, and a 1 ton bomb instead of a normal airplane nose. It was powered by 3 Japanese Type 4 Mark 1 Model 20 rockets, of which each could provide 587 pound-feet of thrust, at a very limited range of about 23 miles. The pilot could choose to fire rockets independently or together, which gave him an additional control of his craft.
The small one seat canopy was located just behind the bomb, and the cockpit had limited controls and instruments, all in order to make the suicide bomber as cheap for mass production as possible. Ohka was attached to a parent bomber by a single bomb suspension lug, which the pilot could use as a sight when targeting the US navy vessels. The cockpit sported an altimeter, airspeed indicator, rocket temperature gauge, a compass, and a handle for arming the bomb contact fuse, of which there were five: one in the nose tip, and four at the tip. In addition to the nose fuses, the wing lead surfaces were also designed to be a bomb trigger.
The Ohka had a standard, conventional pilot stick and rudder system and, obviously, no landing gear. It was an extremely small aircraft, only 6.06 m (19 ft 11 in) in length, and with a wingspan of 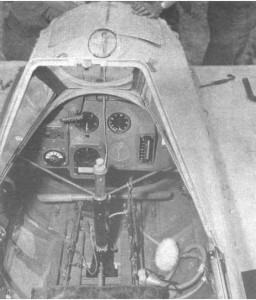 5.12 m (16 ft 9½ in). The plane itself weighed only 440 kg (970 lb), but It housed a 1,200 kg (2,646 lb) Ammonal warhead.
The kamikaze pilot would ride in the bomber along with the crew, until they reached the target area, when he would load into his cockpit and have the canopy closed and locked from the outside. If the bomber would manage to reach the target range, the kamikaze would drop from the Betty and glide towards its target, until he commenced his final bombing dive.
When starting this suicide run, the pilot would engage its rockets and start a dive and reach speeds of up to 1,040 km/h (650 mph), making that final run virtually unstoppable, if the kamikaze changed his mind.
While the Ohka itself was very fast and small, which made it difficult for allies detect it on radar and to defend against it, one of the main issues was that the parent bomber could fly at very low speeds of 20-25 mph while loaded, which made it extremely vulnerable to allied flack fire and anti-bomber fighter squadrons.

Operational History of a “Fools” aircraft 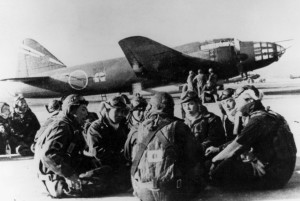 The idea behind the bomber was that it would manage to bring down key American carriers and vessels, and at the same time inflict serious psychological damage to the US sailors. The main model and the only one that has seen any combat was model 11, introduced first during the US invasion of Okinawa in March 1945. Out of 852 aircraft built, 755 were model 11, why the remaining craft were various prototypes with different engines and payloads, mostly model 22s and model 33s. Some of the experimental models were exploring the possibility of launching the kamikaze aircraft from land, caves and even submarines, in case that the land invasion of Japan started.
The Ohka’s first major deployment was on April 1st, during the Okinawa invasion, when six Bettys bore down on the US fleet. It was believed that one of the launched Ohkas made a successful attack on the battleship “West Virginia” but it was later proven to be a near-miss. During this kamikaze raid US transports Alpine, Achernar, and Tyreel were hit, but it is not certain whether these were hit by the Ohkas, or some other kamikaze fighters. All of the parent bombers were destroyed by the anti-aircraft systems during their retreat.
While at first the kamikaze tactic had a desired effect on the US military, the Americans realized that the main danger stems from the high speed of the suicide bombers and that the problem can fairly easily be solved by extending the defensive coverage and destroying the main bombers before they had a chance to launch their payload.
The Japan military sent several more waves in April with 26 Bettys total. These attacks were more successful than the first one, and the Japanese forces managed to sink destroyer Mannert L. Abele and damage several US ships. However, again, almost none of the Betty bombers returned safely
During May three more waves were sent, which caused extensive damage to minesweepers Shea and Gayety, as well as unrepairable damage to the destroyer Hugh W. Hadley. Last of attacks came on 22 June 1945 when six bombers attacked the US fleet, with no recorded hits. 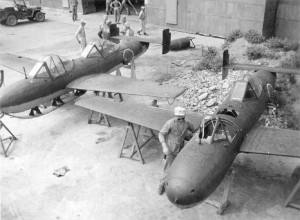 The impact of all these attacks was minimal as no American capital ships were damaged. The Ohkas managed to damage or destroy seven US ships in total, mostly cruisers, minesweepers, and a couple of destroyers. A number of surviving Yokosuka MXY7 aircraft are displayed in museums across the globe, in India, Japan, United Kingdom, and the United states.

Since the Japanese capitulation came fairly soon after the introduction of the kamikaze tactics it is uncertain what the effect of the Ohka bomber could have been, if there was more time to design proper strategies and tactics. It would probably have benefited from a swarm type of approach, where a huge number of these craft would be launched at the same time. The whole approach however, is ethically quite questionable, in the end.
The kamikaze pilots that gave their lives for their country are honored in a number of Japanese war memorials.